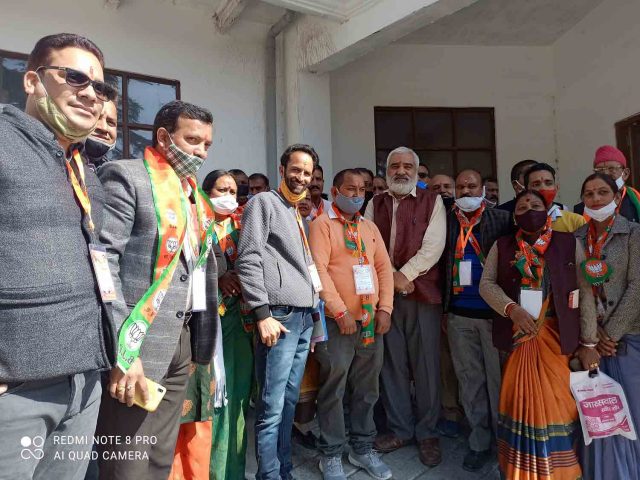 By Our Staff Reporter
Mussoorie, 2 Nov: The two-day training programme of the BJP concluded here today.
Jyoti Prasad Gairola was the Chief Guest at the closing ceremony. Mussoorie BJP President Mohan Petwal welcomed him with a shawl and bouquet. He addressed party workers and acquainted them with BJP’s ideology. He disclosed that 15 thousand BJP mandals all over the country were holding these training programmes. In Uttarakhand, too, training was organised by the BJP in 252 mandals. He said that BJP workers had nationalist sentiments. He asserted the BJP was fully prepared for the 2022 election. The BJP worker is capable of meeting every challenge.
He attacked the opposition and said that the Congress had been indulging in corruption since birth. Congress leaders had no right to take offence against the state government and the Chief Minister on the basis of morality. It was because of their wrong policies that the people of the state had ousted them. The BJP’s leadership was clean. Mussoorie MLA Ganesh Joshi said that, as trained workers, their responsibility towards the party increased further.
Present on the occasion were Mohan Petwal, Kushal Rana, Arvind Semwal, Madan Mohan Sharma, Meera Suriyal, Manoj Regwal, Manoj Kharola, Ramesh Kanaujia, Anil Singh, Sapna Sharma, Ajay Sodhial, Kunal, OP Uniyal, Pushpa Padiyar, Narendra Padiyar, Amit Panwar, Mukesh Dhanai, Narendra Melwan, Rakesh Rawat, Anita Dhanai, Anita Saxena, Kamal Sharma and others.