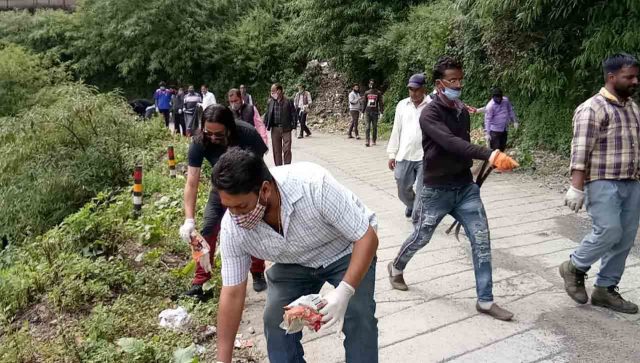 By OUR STAFF REPORTER
Mussoorie, 16 Sep: As part of the service week to commemorate the 70th birthday of Prime Minister Narendra Modi, a Swachhta Abhiyan and Plastic Free Campaign was organised by BJP workers here, today, to make people aware of sanitation and damage caused by plastic to the environment. Mussoorie BJP President Mohan Petwal said that cleanliness is a priority for Prime Minister Narendra Modi and works related to environmental protection and social benefit were being done under the service week.
The 70th birthday of Prime Minister Narendra Modi is being celebrated by the Bharatiya Janata Party across the country as service week from 14 to 20 September and service programmes are being carried out at the local level while following social distancing. Petwal said that according to the instructions of BJP State President Bansidhar Bhagat, various programmes are being organised under the service week. He said that on 17 September, Mussoorie MLA Ganesh Joshi would also lay the foundation for 5 ventilators to be installed at a cost of about Rs 3 crore in the Civil Hospital, Mussoorie.
Present on this occasion were Cantonment Vice President Badal Prakash, Gambhir Panwar, Amit Panwar, Ajay Sodial, Kunal, Ramesh Khanduri, Sapna Sharma, Rajesh Gupta, Kushal Rana, Arvind Semwal, Abhilash and many others.