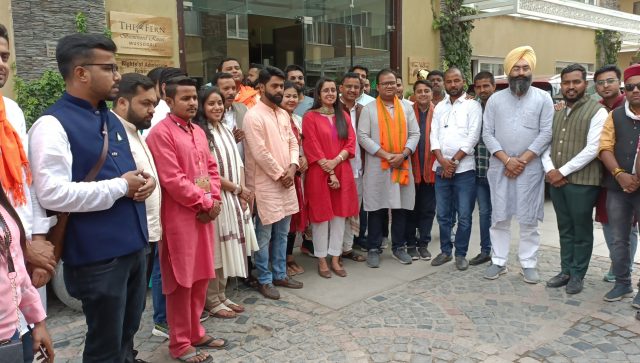 By Our Staff Reporter
Mussoorie, 1 May: The ‘Good Governance Yatra’ of the Bharatiya Janata Yuva Morcha concluded here on Sunday. The Yatra was welcomed by BJYM workers under the leadership of BJP Mussoorie President Mohan Petwal. Abhinav Kumar, National Vice President of BJYM, said that this Yatra is underway in 18 states including Uttarakhand. Its purpose is to ‘Know the people and solve their problems’. BJYM is continuously working in public interest. Through the Good Governance Yatra, the work being done by the government and party organisation in Uttarakhand is being communicated to the people and members of the BJYM from various states. Chief Minister Pushkar Singh Dhami’s model of governance is also being publicised.
National Vice President of BJYM, Neha Joshi said that representatives of 12 states have participated in the good governance yatra. She claimed that the Yuva Morcha is continuously doing social work while being in politics. It would act as an inspiration for the youth in the coming times. Also, the guests of Dev Bhoomi Uttarakhand were made to experience ‘Atithi Devo Bhava’. Talking about the state’s attractions, she said that Tehri Lake is the largest in Asia. A Yoga Peeth like Patanjali and the food park there are world famous, which the representatives from different states were also shown, as was the importance of religious and leisure tourism in Uttarakhand. She said that the purpose of the yatra is to help participants understand Uttarakhand and, after going from here to their respective states, they would share these experiences there.
Mussoorie BJP Mandal President Mohan Petwal claimed that BJP is providing corruption-free governance in its states and Uttarakhand is definitely Devbhoomi. He welcomed all the guests from 12 states and assured them that the BJP in Uttarakhand would continue with its good governance.

Garhwal Post has established itself as a credible, balanced and forward looking newspaper in India. Based in Uttarakhand, the daily is read by the aware, socially and culturally responsible, high-income elite of society.
Contact us: info@garhwalpost.in
https://garhwalpost.in/special-needs-dating-apps/ wealthy women dating mamanatural due date