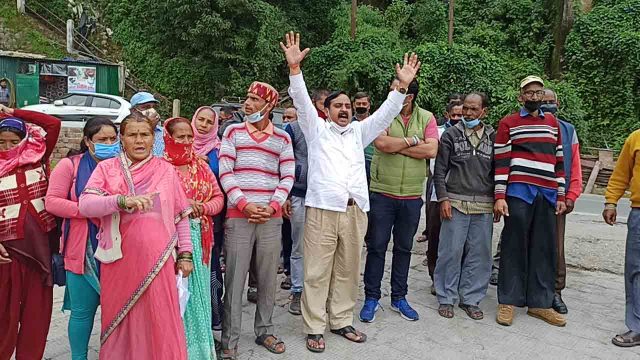 By OUR STAFF REPORTER
Mussoorie, 24 Sep: Former Congress MLA from Ghansali, Bhim Lal Arya arrived in Mussoorie to support the rehabilitation of 84 families evicted from Shifan Court. Along with the evictees, he raised slogans against the state government and voiced their demands.
He alleged that the Trivendra Singh Rawat government was indulging in corruption by providing protection to the land mafia and the poor were being rendered homeless. He lamented that people living in Shifan Court for 30 to 35 years had been rendered homeless. He said the gover government should first have planned the rehabilitation of these people, but it did not care enough for the poor.
He declared that he would soon send a memorandum to the President of India, the Prime Minister, CM of Uttarakhand, Governor and Chief Secretary demanding rehabilitation of the homeless people. Otherwise, the Congress party would agitate throughout the state.
He also condemned the three ‘anti-people bills’ that had been passed by Parliament. He alleged the government was privatising the public sector and leading the country towards slavery.
Also present on the occasion was Mussoorie Congress President Gaurav Aggarwal.