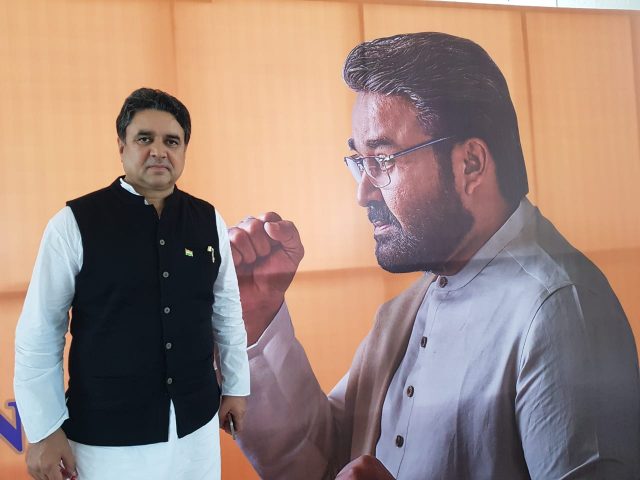 By ANJALI NAURIYAL
DEHRADUN, 28th Sept: From being a newspaper owner in Uttarakhand’s capital Dehradun, to becoming an actor has been an electrifying journey for Satish Sharma.
Not only did he get to work with biggies such as Salman Khan in ‘Sultan’ and Jackie Shroff, Neil Nitin Mukesh and KK Menon in the yet to be released ‘Firrkie’ but also got to hone his acting skills.
“It feels so surreal to be part of the mesmerizing world of Indian Cinema”, Sharma avers. “We have all grown up worshipping cinema, and now that providence has written this beautiful script for me I am determined to put in my 100 percent,” he avers. “I am learning on the job by witnessing masters of the trade. And it is real good experiences, while watching stalwarts, that give you the idea and courage to strive and push to take your learning abilities several notches higher. Interacting with the greats and seeing them perform with consummate ease is a mind boggling experience. The creative process is so empowering. It takes you closer to the almighty whose very essence is inventiveness and imagination and so much more.”
His role as Union I&B Minister in the film ‘Kaappan’ (The Saviour), an action thriller, released worldwide on 20th September has stood out. The film starring Mohanlal, Suriya, Sayyeshaa, Arya, Boman Irani, DRK Kiran, Suhail and directed by KV Anand marks his foray into South Indian Films!
With the release of  ‘Kaappaan’, Sharma hopes to more or less consolidate his position as the quintessential Bollywood politician. “I made my debut as a politician in ‘Maazi’, starring Sumit Nijhawan and Mona Vasu. This was followed by another politician’s role in a nondescript movie titled, ‘Gangs Of Littles’ and then finally the big one in ‘Sultan’, once again a politician who gains in stature by snubbing a wrestler enacted by none other than the mighty Salman Khan.
Even in his latest underproduction film ‘Bole Chudiyan’, starring, the basking in the glory of Netflix series ‘Sacred Games’, Nawazzuddin Siddiqui, Sharma plays a politician of stature. The film is directed by Shamas Nawab Siddiqui and is slated for an early 2020 release. “I don’t mind getting typecast as a politician. Even that is a matter of pride and joy. But that does not take away from my other roles such as the one I am playing in another significant film titled , ‘Diary of Mary Gomez’. I play The Man in Black in this film that hopefully will see me playing a major role in a Prequel as well as a Sequel,” he articulates.
In this short journey one person Sharma really misses is late actor Narendra Jha. “He was like a brother to me. He taught me the rudiments and injected me with rare synergy for acting. I had the good fortune of doing a cameo in his film ‘Viraam’. I was part of the delegation, along with the film’s producer, that took the film to Cannes for screening,'” he shares.
Sharma has easily combined his social responsibilities as a journalist and his acting sensibilities. Through his initiative, ‘ENCHANTING HIMALAYA’ he has been promoting his home state Uttarakhand as a shooting destination amongst filmmakers. “I have no hesitation in stating that I have been the first to promote Uttarakhand amongst filmmakers. I started this initiative as early as 10 years ago. I would attend events in Mumbai and distribute my publication, ‘Picture Uttarakhand’, amongst the film fraternity with single- minded devotion. I met directors, actors and others related to the trade and showed them the face of this lovely mountain state that they had never seen before. And the effort had borne fruit. Today the state has won several awards as the best shooting destination and that is a fuition of a long journey. Even as member of the state film board, I vociferously expressed my opinion against the 10k per day charge on filmmakers for shooting. I am now also into line production with like minded teams and concentrating on giving filmmakers an out of the world experience. My total attention is on ensuring that no director is forced to stop his camera under any circumstances. No director should lose his money. They should all go back with a ‘feel good’ experience that would pull them back to the state again and again,” he underlines.
Striving to give Uttarakhand its new identity, it’s not without reason that he is recipient of several coveted awards such as Uttarakhand Ratan, Pride of Uttarakhand, Uttarakhand Gaurav apart from several others.