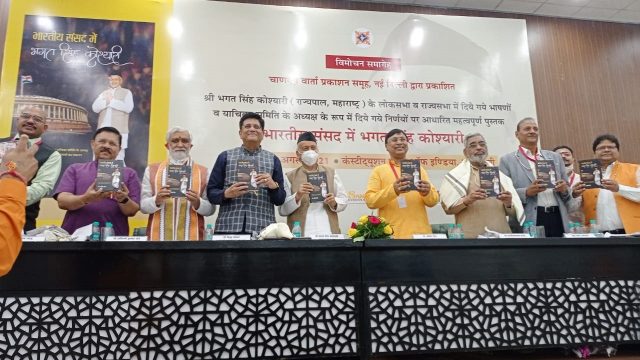 Dehradun, 29 Aug: Chanakya Varta Prakashan Group has published a compilation of speeches delivered by the Governor of Maharashtra, Bhagat Singh Koshyari, in the Rajya and Lok Sabhas as a Member of Parliament. Reports of several important decisions taken by Koshyari as the Chairman of the Petitions Committee have also been published in the book. A special book launch will take place in Doon on 30 August at a local hotel. The Chief Guest on the occasion will be Governor of Uttarakhand, Baby Rani Maurya, while the Special Guest of Honour will be Chief Minister Pushkar Singh Dhami. Governor Bhagat Singh Koshyari will also be present on the occasion.
This will be the second launch ceremony of the book and both the ceremonies have been organised by Editor of Chanakya Varta Publication, Dr Amit Jain and Sonu Tyagi of M/s Approach Entertainment/Approach Communications.
Speaking about the this 450 page book, titled “Bhagat Singh Koshyari in Indian Parliament”, Dr Amit Jain stressed that a nationalist outlook was reflected significantly in the views expressed by Koshyari in the speeches he delivered in Parliament, which was not only inspiring but also interesting for readers.
The first launch ceremony of the book was held yesterday at the Constitution Club in New Delhi. The book was launched by Union Ministers Piyush Goyal and Ashwni Kumar Chaubey in the presence of Governor Koshyari and senior BJP leader Shyam Jaju.
Speaking on the occasion of the book release, the Governor of Maharashtra lamented the fact that, in present times, there was a deadlock in Parliament on most occasions instead of a constructive discussion on issues concerning the nation. He also claimed that some Opposition parties also did want important issues to be discussed and this was unfortunate. He observed that, during his term in Parliament, it wasn’t so and he expressed the hope that important discussions would happen in Parliament more often than deadlocks.
While talking about the book, Chief Guest and Union Minister Piyush Goyal stated said that it ought to be read by people so that they could realise that, in the past, the ruling parties and opposition together used to run the Parliament smoothly and decently. Goyal observed that most of the time, due to the insensitivity of the opposition, the time for parliamentary discussion was getting washed away due to the ruckus in the House. He claimed that this was not only very unfortunate but also an insult to the Parliament of the country. Goyal also praised Koshyari for his contribution in Parliament and said that he had raised crucial national and international issues from time to time.
Union Minister Ashwini Kumar Choubey also shared his views regarding the relevance of this book.
Senior litterateur and patron of Chanakya Varta Publication, Lakshmi Narayan Bhaala, Editor of the publication group, Dr Amit Jain, social worker Deendayal Aggarwal, CA Pramod Maheshwari and Yashwant Singh Negi were also present on this occasion.

Garhwal Post has established itself as a credible, balanced and forward looking newspaper in India. Based in Uttarakhand, the daily is read by the aware, socially and culturally responsible, high-income elite of society.
Contact us: info@garhwalpost.in
https://garhwalpost.in/eastern-orthodox-singles/