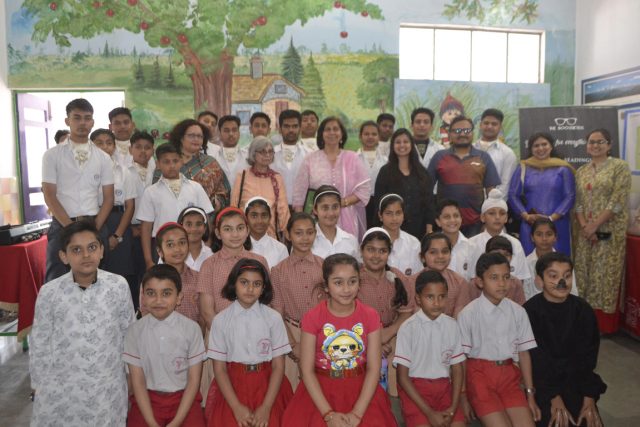 By OUR STAFF REPORTER
Dehradun, 14 Apr: The Booknerds organised a hangout dedicated to children’s books and authors at Little Flower School, here. The event focused on the reading culture and reducing screen time among children.
In the panel were prominent authors such as Ratna Manucha, author of more than thirty books and Principal of Little Flower School; Paromita Goswami, author of Grow Up Messy; and Roshen Dalal, a prolific writer and historian. Students of Olympus High School, Little Flower School and Doon International School were present at the event.
The event was moderated by Rohan Raj, Co-Founder of The Booknerds, a literary startup. After introducing the authors to the audience, Rohan asked the authors about their beginnings as writers. Ratna Manucha replied that since childhood she had been an avid reader and used to sit in libraries and read all the children’s books, which stayed with her as she grew older. She mentioned that at heart she still is a ten-eleven-year-old girl. Author Roshen Dalal who is an ex- teacher, said that teaching history in schools made her realise the need to make these concepts understandable to kids. She also mentioned the story of her first book Puffin History of India Volume One with Penguin and how she became an accidental writer. Paromita Goswami talked about her character, Messy, from her book Grow Up Messy and how Messy was a reflection of her memories of growing up in the 80s.
Next, Ratna Manucha read an extract from her book Cinders Red and Gold followed by the authors talking about their favourite children’s books, how parents could help encourage reading among children, and took up questions from the audience on writing ideas and schedules. Next up was storytelling by Paromita, who with her skills put on a stellar performance engrossing everyone in the animated world of Messy. School children also performed a play called ‘Red Riding Hood’, written solely in verse, narrated by Ratna Manucha. The authors interacted with all the readers during a book signing session.
The event concluded with Neha Raj, Co-Founder of The Booknerds, thanking the authors and handing them mementos. The Booknerds will serve literary delights on 21 and 28 April, respectively, with a book discussion on EL James’ latest novel The Mister and author session featuring legendary travel writer Bill Aitken.