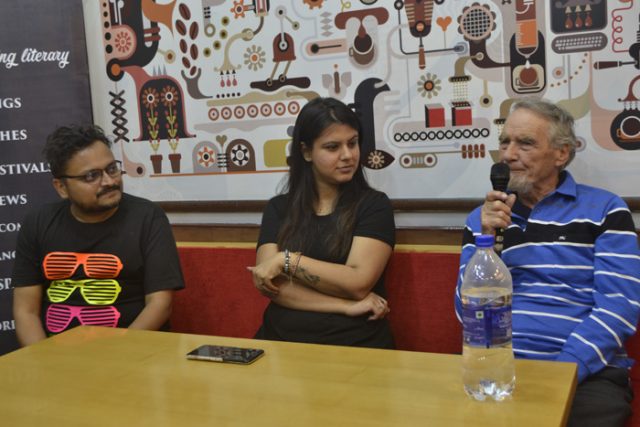 By OUR STAFF REPORTER
Dehradun, 28 Apr: The Booknerds hosted legendary travel writer Bill Aitken at Doon’s oldest book shop, The English Book Depot, here today. Bill Aitken, who was born in Scotland, shifted to India in 1959 with the aim of travelling across the country. He has written a number of books like Seven Sacred Rivers, The Nanda Devi Affair, Mountain Delight, etc. The event also featured travel blogger Surbhi Sabharwal as the lead moderator, who is a weekend traveller inspiring people with jobs to travel more.
Rohan Raj, co-founder,The Booknerds, kickstarted the event with a round of introductions, which included a host of future writers, readers and travel enthusiasts. Devika from The Booknerds’ Team talked about the Booknerds’ story. This was followed by an activity that got audience members to share their travel stories by writing a short journal.
The conversation started with Bill Aitken talking about his younger days in Calcutta and his love for the city. He also talked about his obsession with Nanda Devi. He shared with the audience his travel stories, riding a bike through difficult terrains and growing old in Mussoorie. Surbhi shared her experiences as a solo woman traveller in India, her bike trip to Ladakh and the scenario of travel writing in the digital age. The audience was mesmerised by the accounts of both the panelists, who although belonging to different generations talked and bonded over travelling. The conversation moved to many interesting topics like spirituality and perspective of travelling and some dangerous encounters in the mountains. Bill Aiken also narrated his paranormal encounters, especially a chance meet up with a ‘chudail’.
The event concluded with a book signing, with Bill Aitkin’s fans excited to get a picture with him. Neha Raj, co-founder of The Booknerds, handed mementos to Bill Aitken and Surbhi Sabharwal, thus concluding the event on a high note. The Booknerds will be meeting next for the launch of Nupur Sandhu’s book ‘Numi’.

Garhwal Post has established itself as a credible, balanced and forward looking newspaper in India. Based in Uttarakhand, the daily is read by the aware, socially and culturally responsible, high-income elite of society.
Contact us: info@garhwalpost.in
i like an older guy https://garhwalpost.in/meetup-bedford/