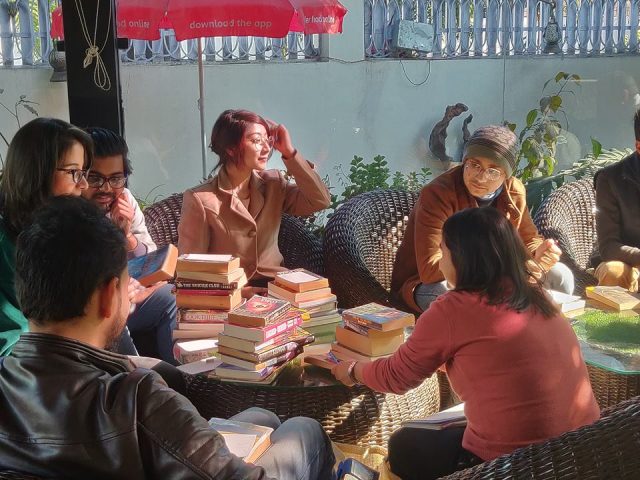 By OUR STAFF REPORTER
DEHRADUN, 16 Dec: An exciting Booknerds event, Bookhustle, was held, here, today. The concept is exciting, although difficult for bibliophiles, as parting with their books is most difficult thing for readers. However, when the Booknerds gathered, some with a handful and others with a bag full of books, everyone eyed each other’s collection.
Gathering everyone around the table with a seemingly heavy bell in hand, Rohan Raj, along with Neha Raj, co-founder of the Booknerds, explained the concept. He described the three main elements Swap, Exchange and Hustle. Swap included a permanent exchange of books, Exchange meant a temporary transaction, and Hustle meant convincing the other person to give up their book. There were five minutes for each pair to convince, con or manipulate the other person. The bell rang and everyone was paired up.
For the first five minutes, on could see everyone deeply engrossed in the discussion. As soon as the time was over, there was a flurry of activity to change pairs and then again the silence. The momentum went on till everyone had interacted with everyone else. At last, everyone settled down with their heap of books and their scorecard on top, along with a contented smile. Some came with two and went home with eight books.
Sonali Shetty with the most transactions was crowned the Bookhustler. She was awarded with a Booknerd certificate and a one-year access to around 2000 books available at the Booknerds Reading Space. Booknerds will be meeting next for a discussion on controversial and banned books over some beer. It is being organised on 23 December.