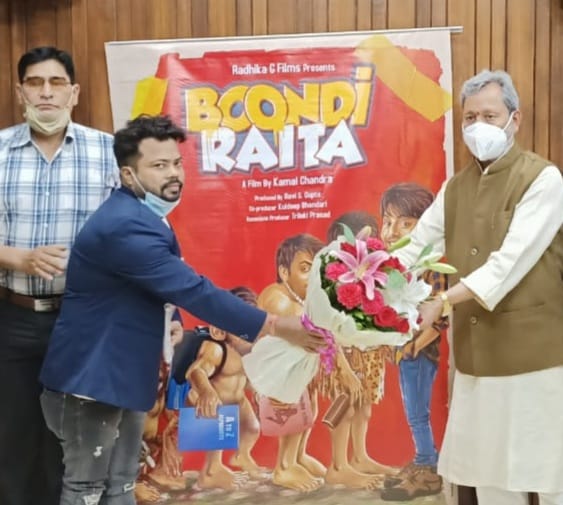 DEHRADUN, 22 Apr: Chief Minister Tirath Singh Rawat interacted with the team of the film, ‘Boondi Raita’, yesterday on 21 April. The Director, Kamal Chandra, and Producer Ravi Gupta, invited the CM on the sets of the film. The film will be shot in Dehradun, Mussoorie, Rishikesh, and other locations, in Uttarakhand in the next few days.

CM Rawat assured the team of full cooperation and said that the state government encourages film shoots in the state.

According to Associate Producer Triloki Prasad, “95% of the film will be shot in Uttarakhand for around 40 days. 5% shoot is scheduled for Delhi”.

Meanwhile, Nodal Officer of Uttarakhand Film Development Council, KS Chauhan, informed GARHWAL POST, that under the present circumstances film shoots are allowed in the state but the crew has to strictly follow the Covid-19 guidelines/SOP issued last year.