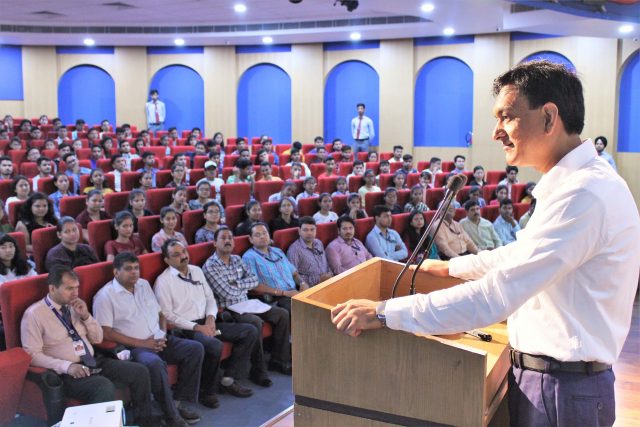 Dehradun, 25 Jul: Thousands of aspiring engineers reached Graphic Era Hill University, today, aiming to transform their dreams into reality. New students shared their dreams with their peers and discussed the reasons for choosing the university over other institutions.
The occasion was the second day of the new BTech session of the university.
Welcoming new students to Graphic Era Hill University, Vice Chancellor Prof Dr Sanjay Jasola said that taking admission in the university was the students’ first step towards success. Graphic Era alumni were placed in more than 38 countries including America, Britain, Canada and Australia.
While speaking at the Students Interaction programme, Pihu Aswal said she wanted to grab the highest package after completing her course, just like the three girls who got packages of Rs 26 lakhs this year. Harshit Mittal said his dream was to make a better application downloader than Google play store. Vaibhav Baluni said that, after his graduation, he wanted to make the best video game and a world class video game development studio in India. While most of the students talked about making their career in Computer Science, IT, IOT, Artificial Intelligence and software development, some students said that they saw their career in the top most companies of the world.
Ayushi Gupta, who hails from Kashipur, said that she wanted to become an IAS officer, while Isha N Porwal said she wished to be an entrepreuner. Ankit Singh and Mohd Fazal said they wanted to join the Indian Army and serve the nation.
In the second session, students danced and sang during the cultural programmes.

Garhwal Post has established itself as a credible, balanced and forward looking newspaper in India. Based in Uttarakhand, the daily is read by the aware, socially and culturally responsible, high-income elite of society.
Contact us: info@garhwalpost.in
transsexual hookup https://garhwalpost.in/meet-young-singles/ good headlines for dating apps