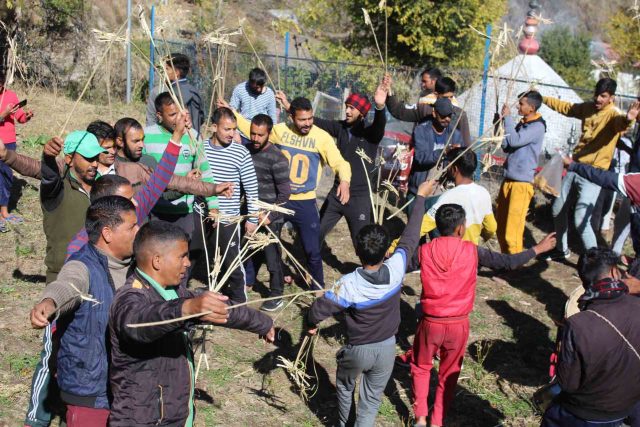 By Sunil Sonker
Mussoorie,15 Dec: The tradition of celebrating Budhi Diwali in Jaunsar Bawar, a tribal area known for its unique culture and traditions, remains vibrant as ever. This is a tradition of celebrating Diwali one month after the actual Diwali. Five days of eco-friendly Diwali are celebrated. There is no noise of firecrackers or unnecessary expense in this celebration.
Diwali is celebrated by lighting a torch of Bhimal wood. In the Panchayati courtyards, rural women and men present scenes of folk culture through group dances. This festival was celebrated in a special way near Banglo ki Kandi, here, in unique style.
For some years, people of many villages have started celebrating the regular Diwali, too, but the old tradition still continues. Villager Birender Rawat said that people celebrate this festival in a great manner, in which delicacies made of local crops are also made.
During the night, all the men burn the Hola and dance to the beats of the Dhol, after which they return to the village to sing the songs of Diwali. On the second day, a bonfire is burnt inside the village Panchayati courtyard.
Migrants working in the outer states and territories have also started returning to celebrate the old Diwali in the Jaunsar region. There is a lot of enthusiasm among the people. With the return of migrants, there is an atmosphere of happiness in the villages. On this occasion, Bhand is organised, which is represented as the churning of the sea by the Devs and the Asuras. In it, a huge rope made of Babai grass is used. Its specialty is that, to make the rope, Babai grass is obtained by cutting it on this day. According to the belief, after making the rope, it is duly worshiped. The villages of Koti, Kharsone, Mogi, Bhatoli, Sanji, Bangseel, etc., are especially famous, which are visited by people from far and wide.
Local villagers Virendra Rawat and Sunil Nautiyal said that, just 30 days after Deepawali, the old hill Diwali is celebrated in Jaunpur. It begins with the Asakya festival. In this, the starch made from hill product Jangore is consumed with yogurt. The main Pakodiya festival of this Diwali was celebrated today. In this, pakoras of Urad Dal are made.
The Holiyat of this Diwali is performed at night, in which all the old, young, children of the village wear new clothes and attend. After Holiyat, the people of the village dance and sing till late at night in the village’s Pandava Chamber.
According to elders of the tribal area, Diwali is celebrated a month after because of the late receipt of the news of Shri Ram’s arrival in Ayodhya in the remote rural areas of the mountain. Others say that Jaunsar-Bawar and Binhar being predominantly agriculture areas, people here are very busy in farming activities during conventional Diwali. So they celebrate a month later.
On the first day is Chhoti Diwali, Ranadayala on the second day, with Badi Diwali on the third day.On the fourth day is Birudi and, on the fifth day, Diwali ends with the Jandoui Fair.