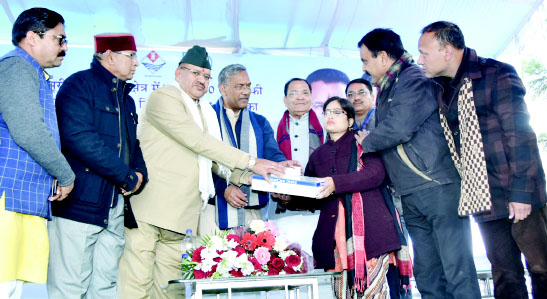 By OUR STAFF REPORTER
DEHRADUN, 31 Jan: Chief Minister Trivendra Singh Rawat laid the foundation stone of various development schemes worth Rs 40 crore at Survey Estate, Hathibadkala under the Mussoorie assembly segment on Thursday. Congratulating Mussoorie Legislator Ganesh Joshi on his birthday, the Chief Minister announced the rejuvenation of Buranshkhanda water supply scheme. Praising the blood donation camp organised on the occasion, he said that blood donation was the biggest gift one could make, as one unit of donated blood saved the life of four people.
Rawat said that the ‘Ayushman Bharat’ scheme launched by Prime Minister Narendra Modi had been taken forward in Uttarakhand with the Atal Ayushman Uttarakhand scheme. Under this scheme, every family in the state would get the benefit of cashless medical treatment worth Rs 5 lakhs per annum. All the residents of the state would be provided cashless cards. The air ambulance services had been started in the state. In case of emergency, serious patients could be air lifted through air ambulances from remote areas and specialist doctors could be sent to those areas. The women self help groups would be provided loans worth Rs 5 lakh without interest. The Chief Minister said that development was taking place at a faster pace and the per capita income had risen to Rs 1.90 lakh. The state government had also given permission to construct 155 bridges.
He announced construction, repair and rebuilding of security walls on the Santla Cevi Motor Road, Kalidas road, Anarwala-Malsi road and Dehradun-Mussoorie motor road in Sahaspur. Cabinet Minister Yashpal Arya, legislators Ganesh Joshi and Khazan Dass were also present.

Garhwal Post has established itself as a credible, balanced and forward looking newspaper in India. Based in Uttarakhand, the daily is read by the aware, socially and culturally responsible, high-income elite of society.
Contact us: info@garhwalpost.in
single man 2022 https://garhwalpost.in/meet-singles-philippines/