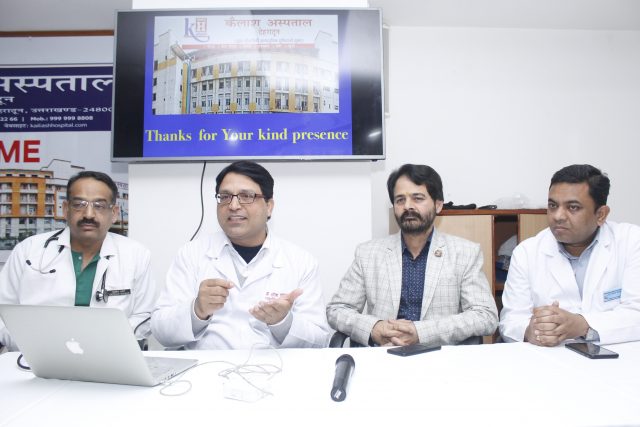 OUR STAFF REPORTER
DEHRADIN, 11 Mar: In a press conference organised by Kailash Hospital on Monday, Burns & Plastic Surgeon Dr. Harish Ghildiyal expressed his concerns over the increasing accidents of high tension electrical burn causing grievous injuries and requested the common people to be vigilant and alert from high tension electrical lines, so that the loss of limbs and life can be prevented.
Dr. Ghildiyal told that since last 2 years in Kailash Hospita, l they have treated 20 such patients who were victims of high tension electrical burns. Out of 20 treated patients 7 have lost their limbs and 2 of them lost their life. Dehradun tops the number of total patients with 11. Out of the 7 who lost their limb 4 were below 14 years of age.
He further shared the case history of recently treated two child who were badly burnt from high tension electrical lines. 11 years old, Anushka, resident of Block Jakholi, District Rudraprayag was playing with other children on the terrace when she came into contact with high tension lines, and got life threatening burns on her right hand, arm, and lower abdomen. As she reached Kailash Hospital in a critical condition, immediately fasciotomy operation was done to save her right upper limb, but in coming days deeply burnt muscles and skin started getting gangrenous changes, and to prevent the spread of infection and to save the life of Anushka it became mandatory to remove the dead gangrenous right hand till mid arm. Upper part of the right arm was also showing gangrene muscles but the underlying bone was normal so to give length for the future prosthetic fitting, a flap surgery was undertaken in which a muscle from the back was transferred over the naked bone to provide extra length to the stump.To cover the lower abdominal deep burnt areas, tissues from the right thigh was transferred with microsurgical techniques and rest of the areas were skin grafted. After the treatment anushka was discharged.
In another similar incident on 24th November last year, 7 year child Abhimanyu, resident of village Malhan, Palio Shimla bypass road, got high tension electrical burns while he was playing on the terrace. He was admitted in a very critical condition, his left hand till arm,right shoulder and lower abdomen was very badly burnt. After 5 plastic surgical operations he was discharged but in this battle for life he lost his left hand.
Dr. Ghildiyal appealed to the common people to be carefull and vigilant to maintain a distance from high tension lines, especially for the children who in ignorance come into contact with such lines and get limb and life threatening burns, which are difficult to treat and often end up in an unfortunate limb or life loss. He also requested the administration to kindly take notice of the increasing incidences of such high tension electrical burn cases in the residential colonies.
Director of the Kailash Hospital, Pawan Sharma and Medical Superintendent Dr. Atish Sinha were also present.

Garhwal Post has established itself as a credible, balanced and forward looking newspaper in India. Based in Uttarakhand, the daily is read by the aware, socially and culturally responsible, high-income elite of society.
Contact us: info@garhwalpost.in
https://garhwalpost.in/ladies-searching-for-serious-relationship/ best site to meet international friends coos bay hookups