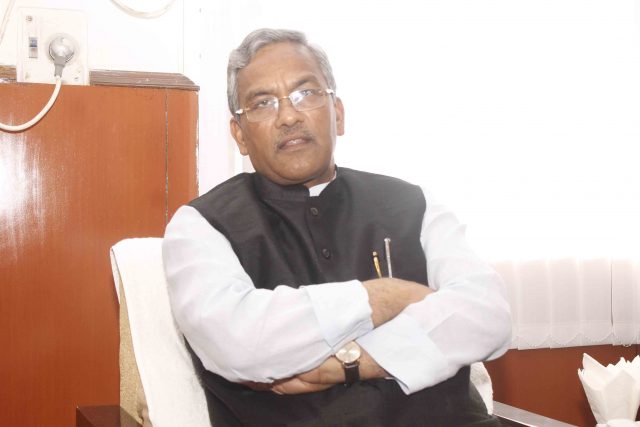 By Arun Pratap Singh
Dehradun, 4 Sep: The Cabinet meeting that had been postponed on Wednesday due to home isolation of CM Trivendra Singh Rawat was finally held at the Secretariat, here, on Friday. No briefing was held because a three day Monsoon Assembly session has already been convened and is due to be held next week. Some important decisions that were taken during the meeting included permitting UPNL (Uttarakhand Poorva Sainik Kalyan Nigam Ltd) to also recruit persons for the government on contractual basis from among those with no defence background. It may be recalled that UPNL was set up by the state government as a recruiting agency for ex-servicemen and their wards for various government posts on contractual basis. Since several posts could not be filled due to non-availability of ex-servicemen or their wards, it was allowed to recruit eligible persons from among civilians also. However, later, this permission was misused by the ministers in power and many of their family members or close relatives were recruited for various government posts through UPNL for some years. This generated anguish and protest among servicemen, ex-servicemen and civilians, too, as allegations were made that the ministers were misusing UPNL to get their relatives appointed to various posts on contractual basis.
This trend was most visible between 2012 and 2016 when the government was forced to issue orders disallowing UPNL to recruit persons from civilian families. Consequently, the departments also stopped sending any requisitions to UPNL for recruitment.
Now, the Cabinet has again decided to allow UPNL to recruit civilians. However, the cabinet note still says that priority must be accorded to recruit persons from servicemen’s families. It remains to be seen if the fresh permission will not lead to misuse once again!
The cabinet discussed 30 proposals of which 28 were approved. Some of the decisions included approval of the proposal to integrate the agriculture and horticulture departments at the government level and approval to return an amount of Rs 1.85 crores collected from tourists by Corbett Tiger Reserve as advance booking, as the National Park could not open in view of the Corona pandemic. The cabinet also approved a proposal to extend the appointment of guest faculty by one year in the government degree and PG colleges. This would benefit 257 teachers currently working as guest faculty. Integration of Agriculture and Horticulture Departments at the government level would mean unification of the department at the top level in the Secretariat and one Secretary to deal with both of them. Sections dealing with the departments in the Secretariat would also be merged.
It was alos decided to amend Civil Security rules. It was decided by the Cabinet to amend IT rules. It approved a proposal of a grant of up to Rs 40 lakhs to telecom companies to set up telecom towers. This is intended to boost telecommunication connectivity in rural and remote areas.
The Cabinet cleared the proposal to raise the height of Maya Devi Temple and Bhairav Temple near Juna AkharaMahadevi Temple in Haridwar.
In view of the opposition by several MLAs to the cut in their allowances and salaries in view of the Corona pandemic, the cabinet decided to bring a new law to enforce the cut. A bill would be tabled in the House during the coming session for approval.
The Cabinet also approved a proposal for reform of the Uttar Pradesh Labour Rules as applicable in Uttarakhand. Approval was also granted for expansion of the helipad at Kedarnath Dham, which would enable Chinook Choppers to land there. It may be recalled that Chinook Helicopters have recently been procured by the Union Government from the US. A proposal to launch a Tourist Incentive Coupon Scheme providing discounts to tourists for promotion of tourism was also cleared.