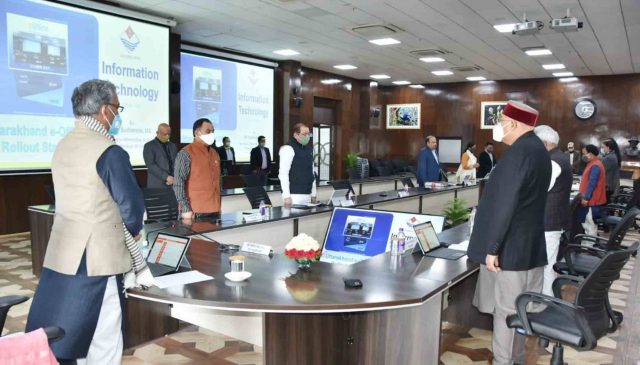 By Our Staff Reporter
Dehradun, 9 Dec: The decision was taken to reopen institutions of higher education on 15 December in the state at a meeting held of the Cabinet, here, today. All protocols of Covid-19 would be followed in the process. It may be noted that all educational institutions were closed since the first lockdown following breakout of the pandemic. Schools were reopened for students of classes ten and twelve, but the colleges and universities had been left out.
A committee had been constituted under the chairmanship of the Chief Secretary to examine the issue. The report of the committee was placed before the Cabinet today.
A presentation was also made before the Cabinet on the Covid-19 vaccine. It was decided that twenty percent of the population would be vaccinated first. These would include those over 55 years of age and frontline workers.
As many as 27 proposals were cleared at the Cabinet meeting chaired by Chief Minister Trivendra Singh Rawat.
It was decided that no Chinese company would be allowed to submit tenders for any work in Uttarakhand. The required changes have been made in the rules. The decision to purchase items from self-help groups was also approved.
Approval was given to creation of 44 super-specialty posts in the Dehradun Medical College. As many as 927 posts were cleared for the Rudrapur Medical College. It was decided to take on lease land from the Century Pulp Mill in Nainital.
Among other decisions was approval of model regulations for private security agencies. A number of modifications were made to service conditions of various government services.
Earlier, before the meeting started, two minutes of silence were observed in memory of the recently deceased Anusuya Prasad Maikhuri, former Deputy Speaker of the Uttarakhand Vidhan Sabha.