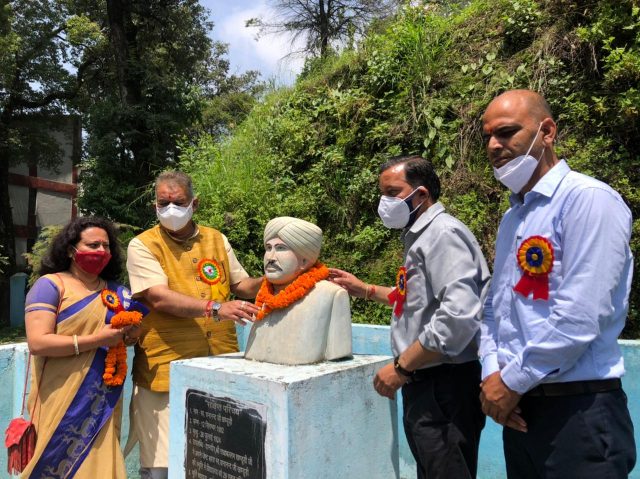 By Sunil Sonker
Mussoorie, 1 Jul: Under the Atal Adarsh Vidyalaya Yojana for excellent education under the aegis of the state government, Cabinet Minister Ganesh Joshi inaugurated the programme at the Ghananand Government Inter College, here, today.
On this occasion, he said that Ghananand Government Inter College has a glorious history and this history would be brought back as an Atal Adarsh Vidyalaya. After the inauguration, Minister Ganesh Joshi said that he is determined that it will become the best school in the state in the coming five years. He expressed special gratitude to Chief Minister Tirath Singh Rawat for this.
He said that Mussoorie and Dehradun are the hubs of education where even students from abroad study but the poor and middle class children of Mussoorie could not take education in these expensive schools. In view of this, Ghananand Inter College was made an Atal Adarsh Vidyalaya and English medium education will be provided in the school.
Joshi also announced donation of furniture, school uniforms for all the students and five computers to the school. He said that efforts would be made to solve the other problems as well.
Block Education Officer Akanksha Rathore said that the teachers here would work with full dedication and hard work. Principal Ravi Uniyal expressed his gratitude to the cabinet minister and expressed the hope that he would continue the support. He said that, in the coming time, the school would be made fully English medium. At present, three classes were being taught in English medium – six, nine and eleven.
Cabinet Minister Joshi added that the state government is continuously working on several schemes initiated by Chief Minister Tirath Singh Rawat and Education Minister Arvind Pandey to improve the level of education. The government is constantly working to provide good education to the children in the hill areas.
Present on this occasion were BJP President Mohan Petwal, Arvind Semwal, Sarita Kohli, Principal, Mussoorie Girls School, Anita Dabral, Principal, RN Bhargava Inter College, Anuj Tayal, Mukesh Dhanai, BJP Mahila Morcha President Pushpa Padiyar, Abhilash, Anil Singh and school teachers.