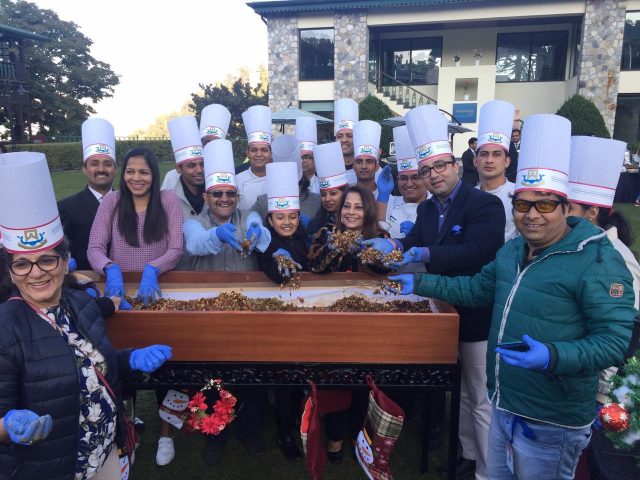 MUSSOORIE, 12 Nov: Festivities bring people together, even if they are a month away. In Mussoorie, WelcomHotel The Savoy is bringing in the spirit of Christmas, in advance, with the customary cake mixing ceremony. Keeping its hundred and seventeen year tradition alive, the annual cake-mixing has, over the years, become an inseparable part of the hotel’s Christmas celebrations. In full attendance, the hotel staff, guests along with dignitaries come together for the customary ritual weeks in advance to “blend an array of dry fruits such as cashew-nuts, sultana, black currant, almond flakes, dates, raisins, figs, apricots, glazed cherry, ginger peels, prunes, cloves, spices, mace, green cardamom, ginger powder, cinnamon sticks, nutmeg powder soaked in orange juice and choicest of spirits such as dark and white rum, white and red wine weeks in advance, to develop that festive aroma and taste,” Executive Sous Chef Prakash Negi, informed the gathering. A head-start to the delectable Rum/Christmas cake, the twenty-minute cake-mixing ceremony was conducted under the wintery blue sky in the Central Lawns of the hotel. Guided by the Executive Sous Chef, the guests followed instructions to the tee and worked on the perfect blend that goes into making a scrumptious traditional Christmas Cake. For those who missed dipping their fingers into the traditional cake mixing pot, do not despair. “There is plenty of time to enjoy the fruits of labour, as the hotel is gearing up and coming out with special packages to bring in the festivities in Mussoorie, come December,” assures General Manager, Gautam Valli.