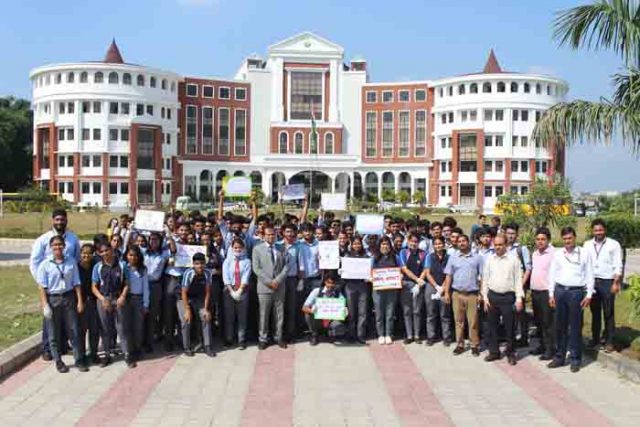 DEHRADUN, 17 Oct: Graphic Era Hill University started a new campaign against Plastic and Drugs, here, today. More than 7000 students of the university took out a rally to make people aware of not using plastic and staying away from drugs. More than 1000 students and teachers will participate in this public awareness campaign, which will run for 11 days in the university. On the first day of the campaign, hundreds of students of BTech and BCA spread the message on plastic and its ill effects, as well as against intoxication, through posters and slogans in the Clement Town area. A team of students made the residents and the nearby shopkeepers aware of the side effects of plastic by urging them not to use it, while the other team spread the anti- drug abuse message. Through the posters the team focused on the government’s ban on the sale of cigarettes and tobacco around educational institutions and warned shopkeepers about the same. Vice-Chancellor Professor Dr Sanjay Jasola flagged off this rally. He said that plastic and addiction to drugs were the biggest problem in society and it was everybody’s responsibility to fight against it.

Pine trees should be replaced by native species in U’khand: Rajiv Kumar