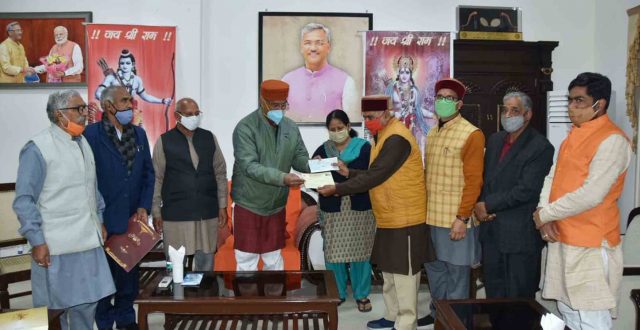 By Our Staff Reporter
Mussoorie, 14 Jan: After Prime Minister Narendra Modi’s Bhoomi Pujan at the Ram temple site in Ayodhya, the preparations for building the temple have been intensified. In this context, the ‘Shri Ram Janmabhoomi Mandir Nirman Nidhi Samarpan Committee’ started its fund-raising campaign here today.
Special worship was organised at the Shri Lakshmi Narayan Mandir and people were urged to donate what they wished for the construction of the temple.
Ramesh Kumar Jaiswal, President of the Mandir Nirman Nidhi Samarpan Committee, said that the history behind the struggle for liberation of the Ayodhya temple was more than 500 years old. Many people had sacrificed and struggled to get the temple reconstructed. After 34 years of trial, the Supreme Court had finally given its verdict in favour of the Ram Temple. Now the construction of the temple had started. A campaign was underway to collect money from all over India for the construction of the grand temple, which would go on from 15 January to 5 February. He said that the people of the country are cooperating in this task.
Present on this occasion wee Pandit Jagdish Prasad Bhatt, Mussoorie BJP President Mohan Petwal, Mussoorie Mahila Morcha President Pushpa Padiyar, Gambhir Panwar, Kushal Rana, Mukesh Dhanai, Suman Nautiyal, Anil Godiyal, Amit Bhatt, Anita Saxena, Ashok Kumar, Arvind Semwal, Kushal Rana, Manoj Kharola and others.