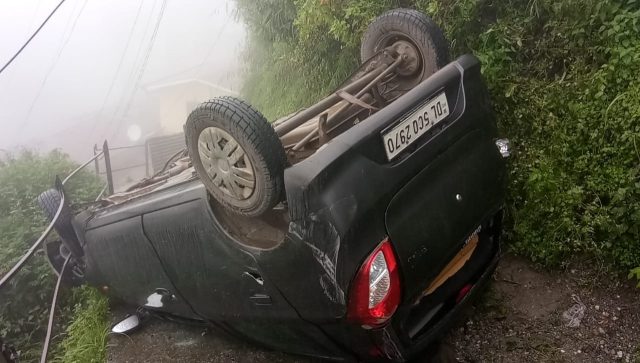 By Our Staff Reporter
Mussoorie, 29 Aug: A car went out of control near the ITBP Gate on the Library Road and plunged downhill to the road below. Three people were injured as a result. They were sent to the hospital in Mussoorie with the help of local people. On receiving information about the incident, police reached the spot and began investigations.
Local residents Raju Shah and Vinay Chaturvedi stated that the car was coming from Dehradun to Mussoorie late at night at a very high speed. It hit the parapet near the ITBP gate, due to which it fell on the road below. There were three youths in it who suffered minor injuries. They were pulled out of the car with great difficulty and sent to the hospital. Locals said that even after calling the 108 ambulance several times, it did not arrive. The police also reached the spot very late.
The driver is believed to have been intoxicated and driving at high speed. The injured are Gaurav s/o Khadu, Shiva s/o Chundru, and Sachin s/o Rajpal, residents of Nawada.