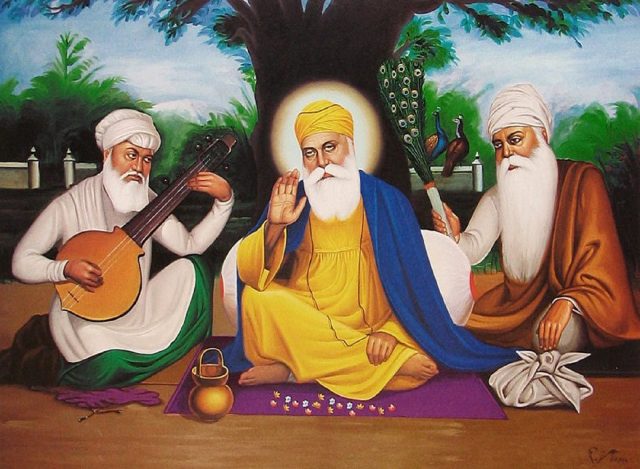 “In every heart Thou art hidden; In every heart burns Thy light. The guru’s message bursts open The granite doors to salvation, revealing the fearless One entranced in profound meditation.”
———- Guru Nanak
The Sikh faith has the singular blessing of having been led by ten exemplary Gurus who were highly evolved both in the spiritual and the temporal domains. The epitome of these remarkable attributes was the founder of Sikhism, Guru Nanak, whose 550th birth anniversary is being observed world- wide in 2019. Born in 1469 AD, Nanak was a precocious child of his parents, Mehta Kalian Das Bedi and Mata Tripta, who resided in village Talwandi Rai Bhoe about sixty kilometres from Lahore . From his early years Nanak showed all signs of being a future redeemer of mankind especially in the traumatic times in north India due to the devastation resulting from the political struggle between Babur, the future first emperor of the Mughal dynasty and Ibrahim Lodi, the Sultan of Delhi.
Nanak was equivocal in his disappointment with the two major religions at the time in India, Hinduism and Islam. He felt:
“Religion lies not in the Yogi’s patched garments,
Nor in his staff, Nor in besmearing the body with ashes,
Religion lies not in suspending large rings from split ears,
Nor in shaving the head, Nor in blowing horns.
To live uncontaminated amid worldly temptations
Is to find the secret of religion.”
He was equally severe on the Qazis and religious preachers:
“The qazi occupies the chair of justice;
He tells the rosary
And invokes the name of God.
Yet he takes bribes
And deprives the rightful owner of his due;
If one asks why
He quotes verses from Quran.”
Nanak was rooted in the social milieu of his day and his central concern was the amelioration of the pathetic situation of those who were oppressed by the rigidity and obscurantist ideals and codes of major religions. Nanak’s empowering message was supportive of one’s quest for an uncomplicated and guilt-free life that was guided by principles based on love, devotion to one God, trust in honest hard work and desire to generously share with those who were less fortunate:
“Those who earn their living by sweat of their brow and give a portion in charity
Know the right path, O Nanak.”
Through this simple mantra of life he showed the way for creation of a community that was simple minded but fearless and which believed in the value of community oriented voluntary labour for the greater good (called Sewa) and which became a lasting legacy of Nanak and a defining feature of the Sikh Panth.
Guru Nanak arrived at a time in history when the true essence of religion had all but vanished and the Hindus and Muslims alike allowed rituals, ceremonies and superstition to displace what was beautiful and meaningful in religion. An anecdote from his life illustrates this best. Bathing on the ghats of Haridwar, Nanak was appalled at the pilgrims gathered there ritually offering water towards to the east in the hope and belief that the water thus offered would reach their ancestors in the distant heaven.
Nanak also started offering the same water but in the direction of the west. On being asked, he answered the curious that he was sending the water to his parched fields hundreds of miles away, just as the water would reach the ancestors in the heaven the water could also reach his fields! At yet another time during his travels, referred to as Nanak’s udasis in Sikh literature, Nanak had reached Mecca. Tired he fell asleep and during the course of his peaceful repose his feet pointed towards Kaaba.
On seeing this, an angry qazi upbraided Nanak for sleeping with his feet towards God. To the angry qazi Nanak humbly replied: ‘Turn my feet in a direction where God is not there.’
Nanak was truly gifted and accomplished in the use of Arabic, Persian, Sanskrit, Hindi and Punjabi. From these languages, which were in use in India, Nanak drew words and phrases to put his message across to his followers, striking a chord with the people who saw him speaking in a manner familiar to them. At places where he halted Nanak gave talks and passed on his message of universal love, hope, non-attachment to the material world, dignity in honest hard work and the importance of voluntary service to better the lot of fellow citizens. His hymns sung at these gatherings became a source for recitals by the people in whose earthy language Nanak sang and spoke. Later, these hymns were collected by successor Gurus, Angad and Amar Das, and finally became the foundation of on which the fifth Sikh Guru, Arjun, built up the spectacular Sikh canon, the Adi Granth, which in time to come became known as the Guru Granth Sahib.
Nanak started a unique tradition by setting his hymns in traditional Indian Raagas and subsequent Gurus, who added to the collection of hymns, also indicated the particular Raag in which the hymn was to be sung. Thirty-one melodious classical Raags are the mainstay of the Guru Granth Sahib and are recited every day in the sanctity of the gurudwaras and the homes of the pious Sikhs as well.
In today’s troubled times, Nanak’s message rings true as much if not more than it did five centuries ago. To a question, “Who is greater, the Hindu or a Muslim? Nanak’s answer was, “Without good deeds neither will find refuge in God’s court. In ignorance the Hindus and Muslims are jealous of each other, not realising that Ram and Rahim are one.” Nanak today is as relevant as ever because the values he gave to mankind are of an abiding and universal character. That his teachings and message have survived the onslaught of five and a half centuries is in itself a monumental cause for celebration.
The present generation is fortunate than an epoch is being witnessed by them which should be memorable for one and all.

(Pradeep Singh is a researcher, writer and author living in Dehradun)