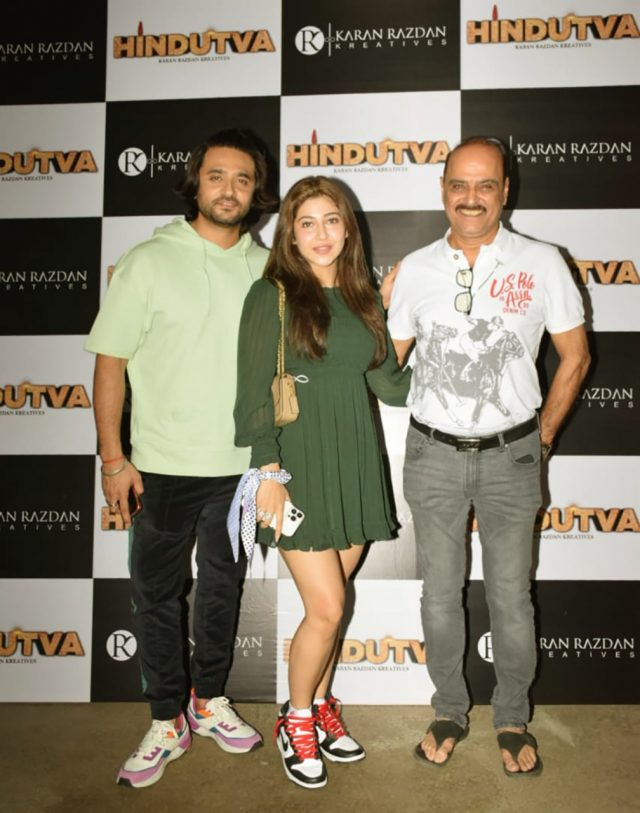 Mumbai, 14 Jan: Filmmaker and writer Karan Razdan’s film Hindutva’s first screening was held at Sunny Super Sound, Juhu. Karan Razdan, who has written for films like Dilwale, Trimurti, Dushmani, Diljale invited all the cast and crew to watch the first screening. Ashish Sharma, Sonarika Bhadoria, Anup Jalota, Madhushree, Sweta Raj, Ravi Shankar and others came to see the film.
Razdan has also written and directed TV shows like Rajni and Tehkikaat. He said, “After so many years of experience, I have directed a film that will nurture friendship and explain the importance of Hindutva. The film says that according to HINDUTVA ‘the entire world is one family – Vasudhaiv Kutumbhkam’.”
Ashish Sharma added that this is the first screening of the film, so they were all very excited. This film is the result of hard work done for more than a year. Director Karan Razdan’s vision is eminently watchable on the big screen.
Anup Jalota said, “I am very excited because I have acted and sung one song in this film. I really enjoyed working in this film because its dialogues are quite interesting. So I appeal to all of you to watch our film, Hindutva, and enjoy it.”
Singer Madhushree, popular for songs like ‘Kabhi Neem Neem Kabhi Shahad Shahad’, was also present. She thanked Karan Razdan for giving her the opportunity to sing a song in the film. She has sung a romantic song in this film which people will definitely like.
The entire shooting of writer-director Karan Razdan’s film “Hindutva” has been done in Uttarakhand. The maiden feature film of Karan Razdan Kreatives production house is produced by Natarajan Balasubramaniam, Mukesh Gaba, Sharon Nadan and Karan Razdan.
According to Satish Sharma, who played an important role in Hindutva, the film is releasing shortly. He said that the entire film was shot in Dehradun, Rishikesh and Roorkee. Razdan, who is an actor himself with years of experience in the cinema industry, has captured Uttarakhand mesmerisingly.
The main actors of the film Hindutva are well-known TV actors Ashish Sharma, Sonarika Bhadoria, Ankit Raaj, Anup Jalota, Dipika Chikhalia, Govind Namdev, Surmeet Basra, Mohd Reza, Agast Annand and Satish Sharma. Music is by Ravi Shankar and lyrics penned by Sweta Raj.

Garhwal Post has established itself as a credible, balanced and forward looking newspaper in India. Based in Uttarakhand, the daily is read by the aware, socially and culturally responsible, high-income elite of society.
Contact us: info@garhwalpost.in
https://garhwalpost.in/top-dating-apps-toronto/ dates for spring break 2022