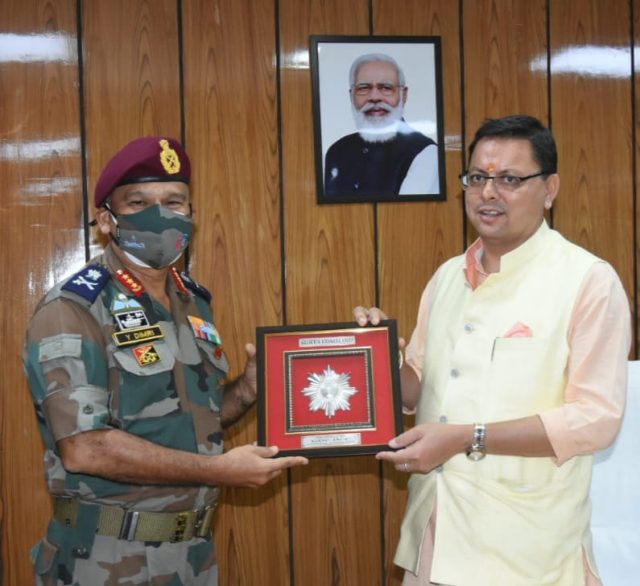 Dehradun, 28 Aug: GOC-in-Chief of Central Command, Lieutenant-General Yogendra Dimri paid a courtesy call on Chief Minister Pushkar Singh Dhami at his office in the Vidhan Sabha Bhawan on Friday.
Dimri discussed various topics related to installation of communication facilities and construction of roads in the border areas of the state with the Chief Minister. The Chief Minister also stressed on the need to widen the roads up to Joshimath-Auli in district Chamoli. The CM also agreed to the suggestions in respect of road construction and development of the border areas of Pithoragarh given by Lt-Gen Dimri.
Dhami asserted that the State Government was paying special attention to the development of border areas. He added that special attention was being paid to connectivity of these areas by road and development of communication facilities in the border region. The Chief Minister said that many schemes have been implemented for the welfare of soldiers in the state. Arrangements have been made in the state for employment of the dependents of the martyred soldiers in state government services. He assured full cooperation to the Army towards the development of roads, communication facilities and health facilities in the border areas. The Chief Minister expressed his desire for opening of a CSD canteen in Khatima as was in Banbasa.
Lieutenant-General Yogendra Dimri said that the Army expected the Chief Minister to cooperate in the widening of Joshimath-Auli road as well as linking Mansarovar Road in the border area of Pithoragarh district with proper road. He further expected the government to provide land for the establishment of CGHS polyclinics at places like Rudraprayag, Karnaprayag, Bageshwar, etc. He said that if sufficient land was provided to the CSD depot located in Dehradun city at a suitable place elsewhere in the city itself, then the Army would consider its shifting.
Additional Chief Secretary Anand Bardhan, GOC Sub Area Major-General Sanjeev Khatri were among those present on this occasion.

Garhwal Post has established itself as a credible, balanced and forward looking newspaper in India. Based in Uttarakhand, the daily is read by the aware, socially and culturally responsible, high-income elite of society.
Contact us: info@garhwalpost.in
zeus dating site