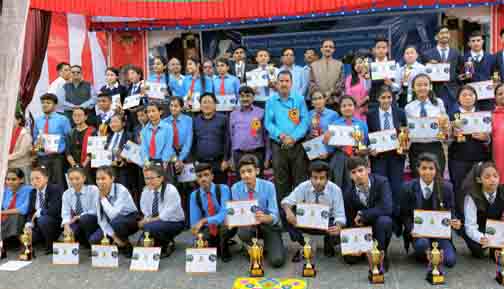 MUSSOORIE, 18 Sep: A three day long CTSA Central Level Exhibition and Cultural Meet was inaugurated on 17 September at Central School for Tibetans, here. The mega event was to provide a socially stimulating learning environment for students of CSTs across India. It provided a unique opportunity to converge as many as 72 winning students in various categories along with 22 dedicated teacher escorts from different schools located in different parts of the country. The students had to compete in three subject areas like Social Science, Science and Mathematics on prescribed themes. The exhibits in Science, Social Science and Mathematics included innovative working and non- working models, charts and write ups on the themes “Science and Technology and its impact on human values”, “Social Science and Society” and “ICT and Mathematics”, respectively. The event began with lighting of the ceremonial lamp by Chief Guest and CTSA Joint Director AS Rawat, along with Principal cum Vanue Director SP Singh, Rector Thakchoe Tsering and the Jury members. This was followed by a welcome song and Lion Dance by the students. Principal Singh then delivered his welcome speech. In his inaugural speech, Jt Director AS Rawat conveyed the message of the Director, CTSA, Sanjay Kumar (IAS) to all the participants. The valedictory function took place in the afternoon. Chief Guest AS Rawat congratulated all the participating students and teacher mentors. All the four participating students in the subject of Mathematics from CST Mussoorie brought glory by winning first positions in all categories. All four students in Social Studies of CST Mussoorie also recorded first positions. CST Herbertpur registered a thumping win in Science. In Mathematics, Riya Chauhan, Tsering Dorjee, Kanishka Negi and Ayush Rana won all the first positions in Chart Display, Non Working Working Model, Write up and working Model, respectively. In Science, Aman Joshi, Gaurav Bhatt and Anushka Rohilla of CST Herbertpur emerged winners in respective categories, and Tenzin Rabzes of CST Mussoorie bagged first prize in write up. In Social Science, Tsering Dolma, Tsering Tsomo, Adesh Kumar and Kyeima Tsering of CST Mussoorie brought glory by winning all first positions. The Overall Championship in Mathematics and Social Science was won by CST Mussoorie, while in Science it was claimed by CST Herbertpur.