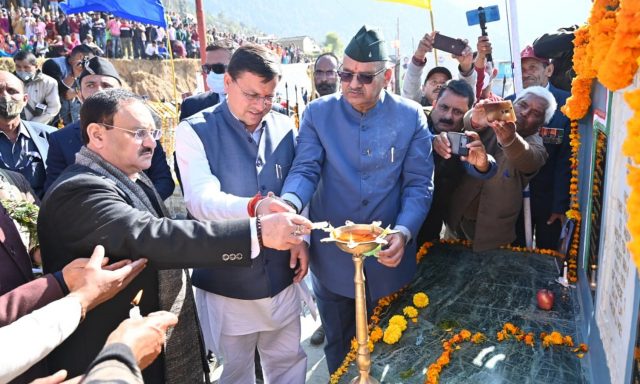 Dehradun, 15 Nov: BJP National President JP Nadda and Chief Minister Pushkar Singh Dhami flagged off the ‘Shaheed Samman Yatra’ from Sawad, Chamoli, today. The yatra is being held for the establishment of the proposed ‘Sainya Dham’. Tribute was also paid on the occasion at the Martyrs’ Memorial. Families of martyrs were also felicitated on the occasion.
Present on the occasion were Union Minister of State for Defence Ajay Bhatt, Cabinet Minister Ganesh Joshi and BJP State President Madan Kaushik.
CM Dhami said it was a great honour to be at Sawad, the land of the brave, who had displayed their valour in the First and Second World Wars, the Peshawar incident, the freedom struggle and in Independent India. It was the sacrifice of such persons that allowed the nation to progress in peace. Uttarakhand had provided lakhs of soldiers for the nation’s defence over the years. As the son of an ex-serviceman, it was a matter of great pride for him.
He declared that the central and state governments were commited to soldiers’ welfare, a tradition that had continued from Atal Behari Vajpayee’s prime ministership to Narendra Modi’s. Under the present leadership, the nation was progressing towards development and the morale of the armed forces was sky high. It was the wish of the Union and State Governments that the contribution of martyrs never be forgotten, which was a Sainya Dham was being set up.
BJP President JP Nadda stated he was honoured to be present on the occasion. Over 1.15 lakh servicemen were presently in the nation’s service.
MoS Ajay Bhatt said the nation was progressing rapidly under the leadership of PM Modi. Minister Ganesh Joshi said that soil from the courtyard of every martyr’s home would be collected for the Sainya Dham’s construction. District and Block wise events would be held to extend honour to the soldiers. The inaugural programme held at Dewal and Tharali blocks, today, were part of this. The yatra would pass through all 13 districts. The families of all martyrs would be presented ‘Tamrapatras’ at the proposed felicitation programmes.
Present on the occasion were MLA Mahendra Bhatt, Munni Devi Shah, Chamoli District BJP President Raghubir Singh Bisth, DM Himanshu Khurana, members of martyrs’ families and a large number of local people.