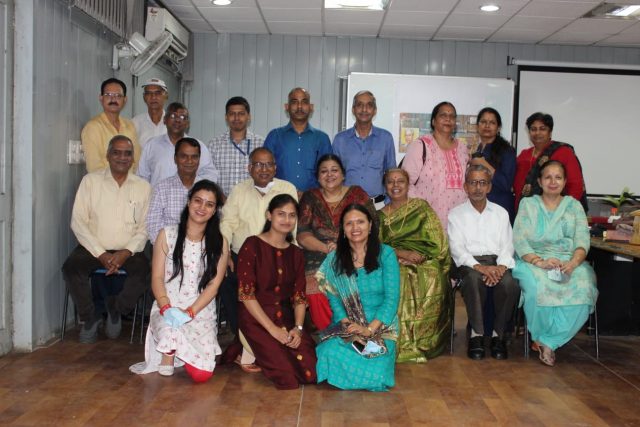 By Our Staff Reporter
Dehradun, 12 Aug: The Central Government Library Association celebrated Librarians’ Day, today, on the occasion of Padma Shri awardee Dr SR Ranganathan’s 129th Birth Anniversary at the Wildlife Institute of Indian (WII), here.
The function was inaugurated by Dr Ruchi Badola, Dean, FWS, WII, as the Chief Guest.
The event began with lighting of the ceremonial lamp followed by garlanding of a photo of Dr Rangnathan. CGLA paid tribute to the library professionals who lost their lives during the COVID-19 pandemic. Subsequently, Sunita Aggarwal, Incharge – WII Library, welcomed the Chief Guest, Keynote Speaker, President and General Secretary of CGLA and other members.
Ramesh Goyal, President, CGLA, spoke about the activities of the organisation and action taken for the betterment of library professionals. He said that making available knowledge in the libraries to all users in the country at the right time, right place and to the right person would be fulfilled through use of the latest use of technology. He emphasised the need for changes in library activities through application of Information Communication Technology (ICT).
Manish Sharma, Incharge – Central Library, gave a brief introduction to the life and works of Dr SR Ranganathan. This was followed by a documentary.
Keynote Speaker Dr G Mahesh, Senior Principal Scientist and former Head, Information Resources and Media, CSIR Headquarters, New Delhi, spoke about libraries, librarians and Indian Independence. He linked the library movement with the Independence struggle.
The CGLA Life Time Achievement Award for the year 2020 was awarded to VP Singh, ex-Documentation Officer, Wadia Institute of Himalayan Geology. The CGLA Lifetime Achievement Award for the year 2021 was awarded to CK Mamik and Mala Dutta. Both are ex-Librarians of Survey of India.
Chief Guest Dr Ruchi Badola emphasised the need to change the information dissemination pattern according to changing times. She also underlined the need to encourage reading habits among children.
In the concluding session, mementos were presented and the vote of thanks delivered by Rajan Gupta, Treasurer, CGLA. He thanked Dr Dhananjay Mohan, Director, WII, for providing the venue to organise the function, as well s Dr YV Jhala, Dean, Faculty of Wild Life Sciences, Dr Monali Sen, Registrar, and Dr Ruchi Badola, Scientist G. The programme was conducted by DK Pandey, General Secretary, CGLA. Among those present were Dr AK Suman, Ram Niwas, RK Sood, KP Singh, SK Bhandari, Seema Khanna, Sunita Sharma, Vikreshawari Dangwal, Shashi Uniyal and others.