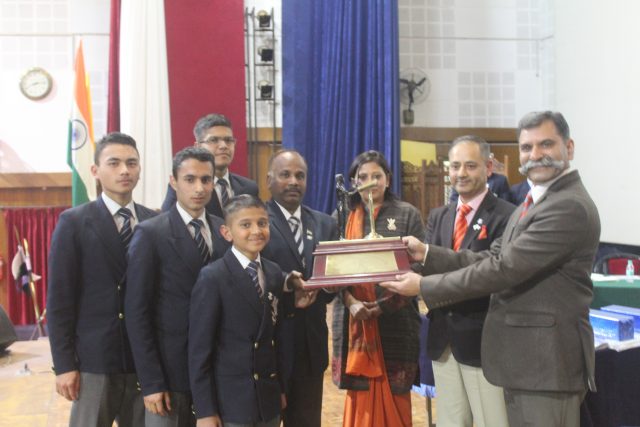 By OUR STAFF REPORTER
DEHRADUN, 6 Feb: The Inter Section English Debates were conducted for the January Term on 5 February at the RIMC, here. The Debates were divided into two categories – the Seniors and the Juniors – and were conducted in the Modified Cambridge Format. The Semi Final Rounds took place in the morning, and the Topic for the Juniors Category was “This House Believes That The Tradition Of Giving Demigod Status to Indian Film Stars And Cricketers Has Done More Harm Than Good To Our Country”.
The Juniors of Pratap Section debated against those of Chandragupta Section, in which the Chandragupta Juniors emerged victorious while, in the Debate between Ranjit and Shivaji, Ranjit Section was the Winner. The Best Speaker in the Semi Final round for the Juniors Category was Cadet Siddharth Singh of Chandragupta Section. The Topic for Seniors was, “This House Believes That Modern Technology Does Not Have A Human Face”. Pratap Section fought hard to qualify against Shivaji Section and emerged victorious. In the parallel debate going on, Chandragupta Section won and hence eliminated the Ranjit Section Seniors.
The Best Speaker in the Seniors Category for the Semi Final round was Cadet Sahil Sharma of Pratap Section. In the evening, the Finals of the Inter Section English Debates took place in the Thimayya Auditorium. The Chief Guest on the occasion was Brig Rajveer Singh, HAD, IMA. The Topic for the Juniors in the Finals was, “This House Believes That There Is No Requirement Of Any Work Of Art To Have Restrictions In Our Society”. The Topic for Seniors was “This House Believes That Entire Revolutions Can Be Plotted And Unraveled In Whatsapp University”. The debate lasted two hours in which the Cadets used their oratory skills, their knowledge and their brains to get the Trophy for their Sections. In the Juniors Category, the Team of Ranjit Section emerged victorious against the Team of Chandragupta Section. Cadet Yagnya Pathak was adjudged the Second Best Speaker and Cadet Rubin Singh was adjudged the Best Speaker in the Finals in the Juniors Category.
In the Seniors Category, Pratap Section emerged victorious after a tough fight with Chandragupta Section. The Second Best Speaker in the Seniors for the Finals was Cadet Sub NCO Ripunjay Nathani and the Best Speaker Award was bagged by Cadet NCO Agam. Chandragupta Section won the Inter Section English Debates Trophy and Pratap Section landed as the Runners Up. The Judges for the Finals were Dr Poonam Painuly, Diweja Pandey and Dr Neera Kapoor, who appreciated the Cadets for their eloquence and motivated them to excel further in life. Thereafter the Chief Guest, Brig Rajveer Singh congratulated the Cadets for displaying a high standard of Debate and inspired them with his motivating words. The Debates concluded with a Vote of Thanks proposed by the Commandant, Col Vivek Sharma.