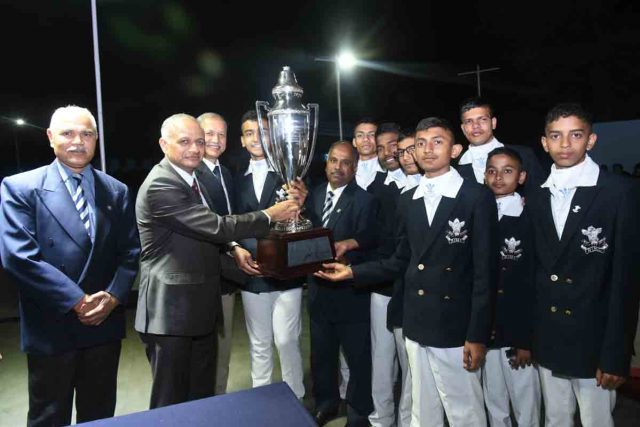 Dehradun, 10 Mar: With the commencement of the January Term at the RIMC, the young and aspiring Cadets endeavour to outdo each other in the Boxing Arena.
The Inter Section Boxing Championship that commenced on 8 March marked the beginning of the celebrations of Founder’s Day. This year is the 99th Reunion, just one short of the Centennial Year of 2022. The Bouts on 8 March were conducted at the Bewoor Hall in 11 categories. The highlight of both the Open Category Bouts was that they resulted in an RSC win (Referee stops the Contest) due to injuries.
The al fresco Finals were scheduled for 9 March at the Open Air Auditorium. Chandragupta Section became the outright winner, even though six bouts were yet to be contested subsequent to the Chief Guest’s arrival.
The Chief Guest, GOC 14 Infantry Division, Maj Gen Rahul R Singh, witnessed the remaining six bouts. The Title of ‘Upcoming Boxer’ went to Cadet Raghav Aggarwal, while Cadet VL Zuala was declared the ‘Most Spirited Boxer’ and Cadet Prashant Narwariya emerged as the ‘Best Boxer’. Pratap Section secured the fourth position with 14 Points. There was a tie for the Second Position between Shivaji and Ranjit Sections and Chandragupta stood at the top with 34 points.
The bouts were judged with great precision by referees Sub Devendra Rawat and Sub Sanjay Rana from the IMA. The overall organiser of the event, Manoj Nama, also rendered technical support for all the bouts.
Mrs R Singh gave away the prizes to the victorious pugilists of different categories and the Winner’s Trophy was given away by the Chief Guest to the triumphant Chandragupta Section.
In his address, the Chief Guest remarked that, ‘this Cradle of Excellence has been training Scholar Warriors who have taken the Flag of RIMC to the acme at the NDA, IMA and various other Training Academies’. He recalled stated that ‘there was no dip in the spirits, despite the pandemic. The credit goes to the Commandant, Col Ajay Kumar, and his team, who kept the show going’.