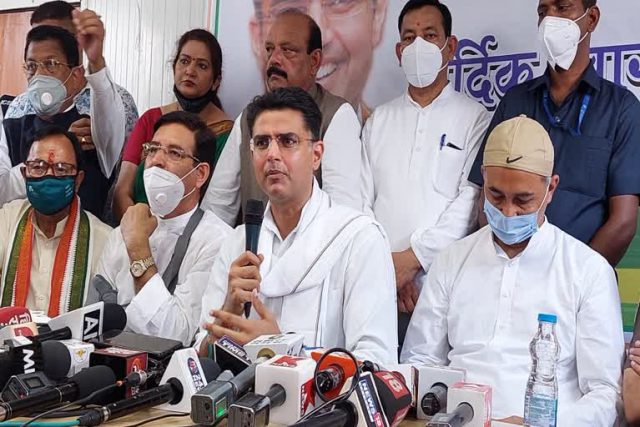 By Our Staff Reporter
Dehradun, 16 Jul: Former Deputy Chief Minister of Rajasthan and senior Congress leader Sachin Pilot today slammed the Union Government on the issue of inflation. He said that the prices of petrol, diesel and cooking gas would have to be reduced. He claimed that, for this, Congress would continue to put pressure on the government by becoming the voice of the people. Also, taking a dig at the UP CM, Yogi Adityanath, he said that the directions of the Supreme Court ought to be followed regarding the Kanwad Yatra.
Pilot, on a visit to Dehradun, was addressing the media at Congress Bhavan, Rajpur Road, here, today.
He said that the public was troubled by rising inflation, but the Modi Government did not seem to be bothered or concerned, even as the people continue to suffer due to very high prices of petrol and diesel. The Modi Government was anti-poor, he claimed, as the prices of petrol had crossed Rs 100 per litre in most cities of the country. Congress had been strongly protesting high prices and would continue to put pressure on the Centre to reduce them. Pilot not only targeted the Modi Government but also accused the BJP Government in Uttarakhand of failing on every front. He claimed that there was an atmosphere of chaos everywhere in Uttarakhand. The BJP leadership was confused and directionless. Pilot said that no one had any objection to the BJP changing its presidents repeatedly, but in a small state like Uttarakhand, it was not good to change the CM so frequently. He also criticised the state government for granting exemption on land use for the construction of party offices in the state. He claimed the Congress was engaged in a movement over the issues concerning the common person and the people in Uttarakhand were also eager to bring the party back to power in the state in the upcoming assembly elections.
On the question of the CM’s face in the upcoming assembly election, Pilot said that it was an established tradition of Congress that elections were fought under collective leadership with the leader being elected only after the election. Present at the press conference were PCC Chief Pritam Singh, former minister Dinesh Agarwal, MLA Qazi Nizamuddin, former minister Hira Singh Bist and Congress leader Lalchand Sharma.
Earlier, Pilot reached Jolly Grant Airport today, where he was given a warm welcome by Congress party workers led by Congress State President Pritam Singh. From Jolly Grant airport, his convoy left for Dehradun.

Garhwal Post has established itself as a credible, balanced and forward looking newspaper in India. Based in Uttarakhand, the daily is read by the aware, socially and culturally responsible, high-income elite of society.
Contact us: info@garhwalpost.in
https://garhwalpost.in/pittsburgh-over-50-singles/ kinky meeting https://garhwalpost.in/free-dating-sites-no-subscription/