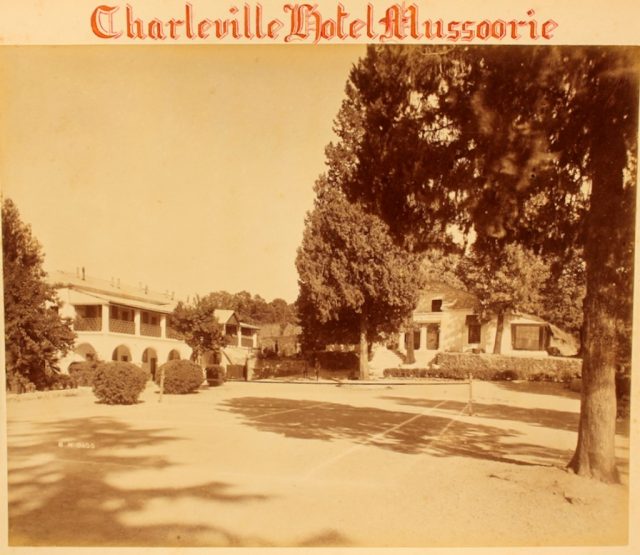 ‘There is a hotel in Mussoorie,’ wrote the traveller Lowell
Thomas in The Land of the Black Pagoda (1926), ‘where they ring a bell just before dawn so that the pious may say their prayers and the impious get back to their own beds.’
Old timers will have you believe that an old, short-sighted chowkidar rang the separation bell at four every morning. It guaranteed absolute privacy for the guests to scamper back to their own rooms. Though our story of the Charleville begins in 1854, when Gen. Wilkinson took over the grounds of the Chehjuli Estate – named after the abutting Jaunpur’s Chehjuli Patti – to build a Hotel.
For long years I too suspected that the name must have some kind of French origins, as say the Maharaja Kapurthala’s Chateau. But I couldn’t have been more wrong. I found that the locals called it ‘Charlie-Billy’ – after the sons of Mr Hobson, the Manager of the Mussoorie Bank – who on retirement in 1861, bought the estate.
Afterwards, in the early years of the twentieth century, the brewer VA Mackinnon started the Happy Valley Club. It had tennis courts; a library; gymkhanas and a six-chakkar polo ground. The last Pagal Gymkhana was on 19th June 1943 to raise funds for the Red Cross during World War II.  And succeed it did, what with donors like the rulers of Kapurthala, Rampur, Rajpipla, Palanpur, Baoni, Kasmanda, Sarila, Katesar, Bansi, Pratapgarh, Nanpara and Bhadri.
Among it’s many rich and famous visitors was the Nobel Laureate Rudyard Kipling, who arrived in the summer of 1888. It was a year that saw the founding of Wynberg-Allen Memorial School in Balahisar, as also Oak Grove School in Jharipani. Your casual visitor would have found him tucked away in the company of his American friends, the Hills couple of Allahabad. Edmontia Hill had taken a picture of the hotel’s Front Office and the author inscribed four lines on a picture, giving it the kiss of immortality:
“And there were men with a thousand wants,
And women with babes galore
But the dear little angels in Heaven know
That Wutzler never swore.”
And pray who was Wutzler? Henry Wutzler, the German owner’s fame rested on his foul mouth that would have sent the staff scurrying.
Years later, while writing Kim (1899), memories of that single visit must have come visiting:
‘Day after day Kim watched the lama return to a man’s strength. Among the terraces of the Doon he leaned on the boy’s shoulder, ready to profit by wayside halts. Under the great ramp of Mussoorie he drew together as an old hunter faces a well-remembered bank, and where he should have sunk exhausted swung his long draperies about him, drew a deep double-lungful of diamond air, and walked as only a Hillman can.’
Later, Kipling’s legal spat with the excitable Hearsey finds mention in a letter to Edmonia Hill: ‘The Native Press is pointing out with glee that I ought to have been whacked by Hearsey. Hall tells me that the same gentleman is in Naini Jail maturing plans that shall sweep the newspaper off the face of the earth.’ The Pioneer survived, as did Kipling, but his survival was because he left India.
In 1959, the National Administrative Academy moved from Metcalfe House in Delhi to Mussoorie with Dr A N Jha, ICS, as its first Director. Tales have it that one day the Grand Old Man was hustled out of a meeting, because news had just trickled in of a fire at his home in Rushbrook, today’s Padmini Niwas Hotel. Off he dashed, fearful the fire would consume his precious stash of vintage wines.
Sportingly, that was the first thing the valiant fire-fighters secured. Then and then only did he relax, lit up his pipe and smiled as the young officer trainees doused the hungry flames. Tragedy stuck again on 24th May 1984. An accidental fire starting in the gas godown burnt to the ground the VIP Guest House, the Library (then located below the Mess), the Dining Room and the Director’s residence.
But like a Phoenix, the National Academy rose anew from the ashes of the old Charlie-Billy’s Hotel.