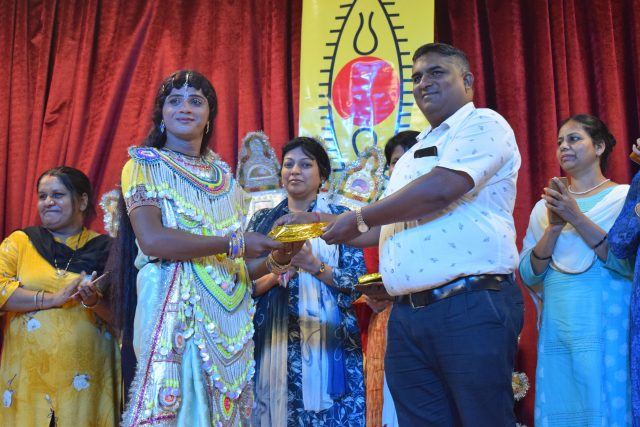 Dehradun, 22 Aug: Dolphin (PG) Institute of Biomedical & Natural Sciences organised a programme of Chhau dance in its premises. The programme was organised under the aegis of DSWC (Dolphin Students Welfare Committee) in association with SPIC MACAY (Society for promotion of Indian Classical Music and Culture amongst Youth) in which a 22-member troupe from Purulia presented Chhau dance and held everybody spellbound.
The students watched awe-struck as the artists, laden with heavy masks, elaborate head gear and dazzling sets of ornaments danced, aggressively depicting scenes of Mahishasura Mardhini. The attire, the body language and the emotions portrayed through the characters looked almost real. The scenes with Kumaraswamy on his peacock, Goddess Durga on the lion and the manifestations of Ganesha and Shiva were spell-binding. The audience sat enraptured while watching the asuras’ dance and the scene of the creation of Matha Jagadamba from the hands of Brahma, Vishnu and Maheswara.
For a major chunk of the students, the vigorous form of Chhau dance of Purulia district was a familiarisation trip. The artists of the Chhau dance said this dance was believed to date back to over a century. It was patronised by the royalty and landlords of the Purulia region. Since its inception, members of Mahato, Kurmi, Bhumija, Deowa, Bhuama and Dom communities have sustained this dance form. The dance was accompanied by musical instruments like dhol, dhamsa and shehnai.
Deputy Director (Administration) of the institute, VK Nagpal said the objective behind inviting the group to the college campus was to create a platform for students to familiarise themselves with the dying traditional dance forms of India.
DSW Vipul Garg said that events like those served a dual purpose, as they provide the much-needed reprieve to students from the academic pressure and also helped them remain rooted toin their culture and traditions. The programme was attended by Coordinator, IQAC, Dr Shruti Sharma, Joint Director (Administration) Sunil Kaul, Malti Sahwney along with HoDs, Faculties and students of all departments of the institute.