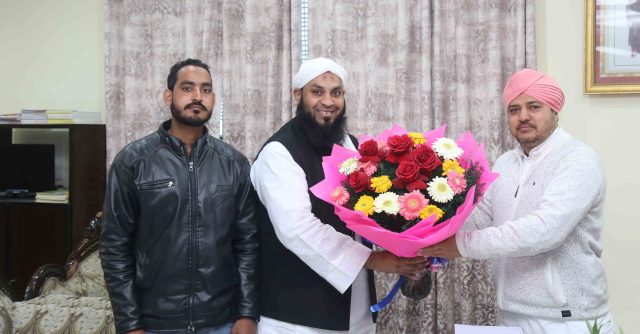 Dehradun, 8 Jan: The Chief Imam, Uttarakhand, Sadar, Jamiat Ulema-a-Hind, and Manager, Madrassa Jamiat-us-Islam, Raees Ahmad Qazmi, visited the Guru Ram Rai Darbar Sahib, here, today. He held a formal meeting with Mahant Devendra Dass on the occasion.
During the meeting, detailed discussions were held between the Mahant and the Chief Imam on the Citizenship Amendment Act. The two expressed their concern about the myths and misconceptions among the common people about the law. Besides this, they had discussions on improving the conditions of Uttarakhand’s Madrassas and Waqf Board.
The Chief Imam said that a large number of people are in a state of confusion about the Citizenship Amendment Act. He wanted the Government to appoint senior representatives who could explain this law correctly and in easy terms so that the general public could understand. Such a direct dialogue between the Government and the people will remove the myths and misconceptions.
He expressed confidence in the Darbar Sahib and said that any effort made by it would be welcomed.
Mahant Devendra Dass said that the myths and misconceptions among the common people about this law could be sorted out. He assured the ‘Mufti’ that he would talk to the Chief Minister on this subject and create an environment so that a direct dialogue could be established.