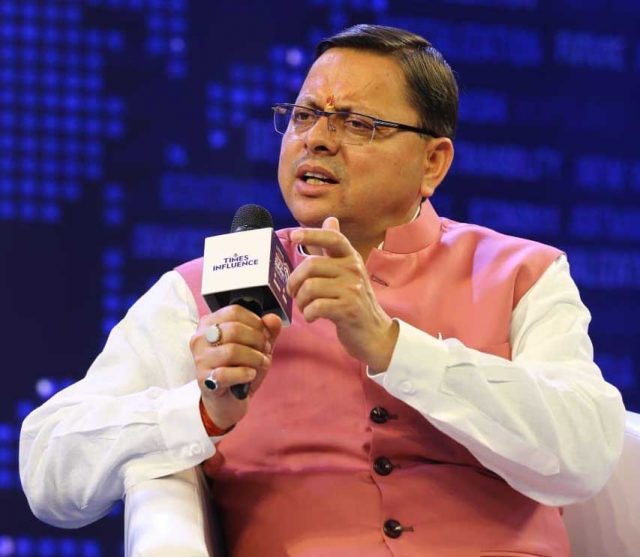 By Our Staff Reporter
New Delhi, 25 Nov: Chief Minister Pushkar Singh Dhami today participated in the TIimes Now Summit – 2022 organised in New Delhi today. On this occasion, Chief Minister Dhami said that the Chintan Shivir organised in Mussoorie recently had been organised with the objective of preparing a roadmap of development for the state and the contribution that various departments could make. He added that this exercise would ensure rapid development in the future. The agenda was to prepare a roadmap for next 25 years and to make Uttarakhand a leading state in every sector by then. The contemplation camp would help in the simplification of issues and procedures, besides preparing a roadmap of development in a state that is beset with difficult geographical conditions.
The Chief Minister explained that, at the Chintan Shivir, many meetings and sessions were held with the top officials of the state and district magistrates of districts for 3 days. He reminded that Prime Minister Narendra Modi had described the third decade of the 21st century as the decade of Uttarakhand and added that the state government is working hard to achieve this objective. Dhami said the state government is constantly trying to solve problems like migration. Work on providing employment and creating self-employment opportunities on a large scale is being done by the state government. He added that the recruitment process for various vacant government posts is also underway, on the one hand, while on the other, youth are being motivated to launch start-ups under the Mukhyamantri Swarozgar Yojana, Homestay Yojana and Veer Chandra Singh Garhwali Yojana. The state government is taking all possible steps to promote self-help groups. He said that in the context of the economy and ecology, the government is working on the proper development of the state as well as for the protection of its natural resources.
Speaking about the reconstruction of Kedarnath Dham, the CM said that Shiva blessed only his devotees with such an opportunity. Modi received the good fortune of rebuilding Kedarnath Dham. This time, a record number of devotees had visited the Char Dham shrines. He added that work is being done to prevent and reduce disasters. The Disaster Management Department, the SDRF and Army are always ready to deal with disasters together. He said that helicopter services had been continued regularly in Chamoli and Dharchula, so that their help could be sought at the time of disaster.
The CM emphasised that the Centre and the state governments are working together to take forward the development of Uttarakhand. He said that under the leadership of Prime Minister Narendra Modi, construction work on all-weather roads had been done for smooth travel to the Char Dhams. Today, the Char Dham Yatra had become very convenient for the devotees. This was the advantage of the double engine government, he claimed, adding that after reconstruction of Kedarnath temple, work had started in Badrinath, too, under the master plan. Road network and air services in the state had been expanded. Work had begun on ropeway projects in Kedarnath and Hemkund. He said that the life of Prime Minister Narendra Modi is full of discipline, determination and struggle.
Dhami claimed that the state government is working on the conservation of ancient buildings, folk culture and traditions. It is also working on making the Manaskhand Corridor, under which work is underway to connect all the temples of historic importance in the Kumaon region. After the Agniveer Yojana, public dialogues were conducted at various places by the Uttarakhand Government. One or the other from almost every family of Uttarakhand state was or is in the service of the country. He said that the Uttarakhand government would work to give priority to the Agniveer jawans after their return from serving the country for four years.
Dhami asserted that the Uniform Civil Code (UCC) would be implemented soon in the state of Uttarakhand. After taking feedback from the common folk, the final draft is being prepared. He said that people living on the border were the sentinels of the country’s borders, who keep the border area alive and work as allies of the army. On the Chhawla rape and murder case, the Chief Minister said that the state government is making all possible efforts to ensure justice for the daughter of Uttarakhand. Have expressed desire to step down from Governor’s Post: Koshyari

Wordsmiths on the Prowl

Garhwal Post has established itself as a credible, balanced and forward looking newspaper in India. Based in Uttarakhand, the daily is read by the aware, socially and culturally responsible, high-income elite of society.
Contact us: info@garhwalpost.in
young woman seeks older man