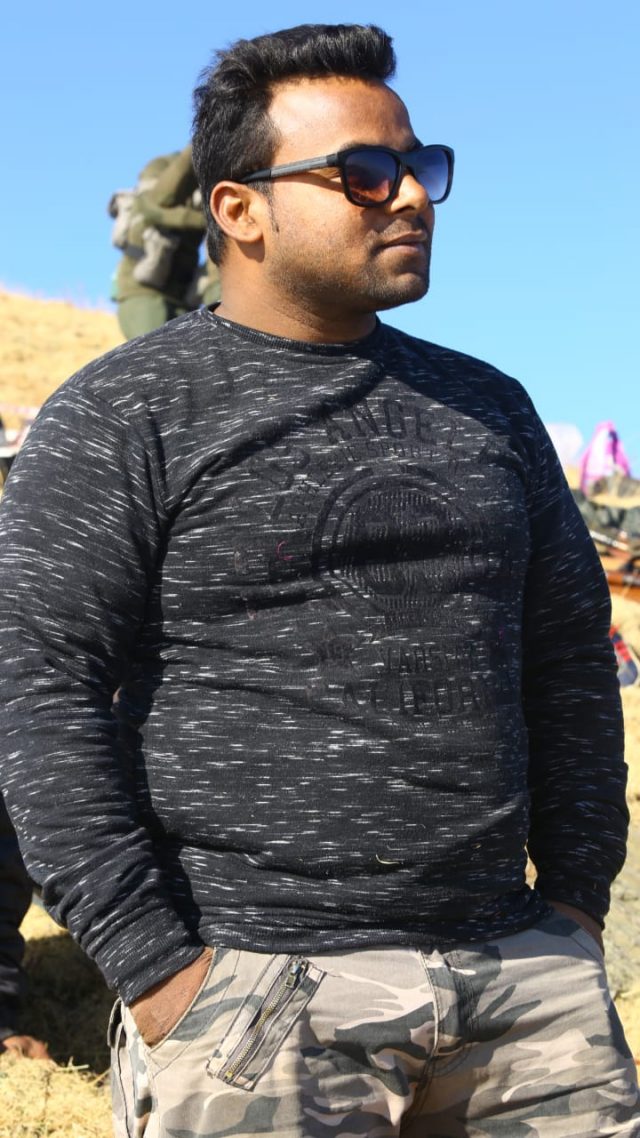 By Sunita Vijay
Ajay Bharti captures the folk flavour of the state while making actors dance to his tune in the upcoming film “72 Hours: Martyr Who Never Died’.
Ajay Bharti, a choreographer from Pauri district of Uttarakhand, is keeping his fingers crossed as he awaits the release of his film, “72 Hours: Martyr Who Never Died”, based on the true story of the solo battle of braveheart rifleman Jaswant Singh Rawat, which has been written and directed by Avinash Dhyani. It has an impressive star-cast and captures the true essence of Uttarakhand as, both, the main executive limbs of the film and the protagonist, belong to this state. The film, which has been majorly shot in Uttarakhand and, partly, in Arunachal Pradesh, has six songs, all choreographed by Ajay.
Ajay, an alumnus of Scholar’s Home, Dehradun, has been has been working in Uttarakhand’s film industry since 2001. He has worked in Garhwali, Punjabi and films in other regional languages, too. “I have worked in 7-8 Garhwali films and in about 400 plus albums, where I have acted, choreographed and directed,” avers Ajay.
The enthusiastic choreographer adds, “My big feat came with the movie, ‘72 Hours: Martyr Who Never Died’. The movie is a biopic on Rifleman Jaswant Singh Rawat, a war hero of 1962, about whom the young generation knows very little. Dhyani is a good friend and we both have worked together earlier. He has done substantial research on the biopic and it has 6 songs sung by Shreya Ghosal, Sukhwinder Singh, and Shaan, all choreographed by me. The shooting was done in Chakarata, Harshil, Dehradun and a few other ‘jewel’ locations in Uttarakhand to provide a visual treat to the audience. I am a pahari and working for 17 years in this region gives me the added advantage of being more familiar with the locations to better choreograph the songs. We chose the best locations and the peerless beauty of Uttarakhand has further embellished the songs. I am sure the viewers will be attracted to visit this state after watching the film.” Ajay specialises in semi-Bollywood, classical, and Uttarakhandi folk. “I thoroughly enjoyed choreographing the songs for the film. It was a challenging task to be an important component of a big film.”
The big break brings bigger aspirations for Ajay. After seeing the response of the audience and the performance of the film, he may plan to shift to Mumbai, but only after taking stock of the situation. He adds that his heart beats for Uttarakhand and he wishes to stay connected to his roots. His priority will always be to promote the state and to work for its projection to the viewers. Talking about the support received by film industry in Uttarakhand, he says that till date everything has to be managed by oneself. “If the administration extends support, Uttarakhand doesn’t have dearth of talent and beautiful locations. It will promote the local artists, increase tourists, project Uttarakhand on a bigger platform and provide better recognition.”
Ajay wishes to work hard to prove his mettle in Bollywood. His talent and luck will be put to test through 72 Hours: Martyr Who Never Died. Whether his choreography sticks to the story or jumps off, the film whose teaser released two days ago will decide his fate.