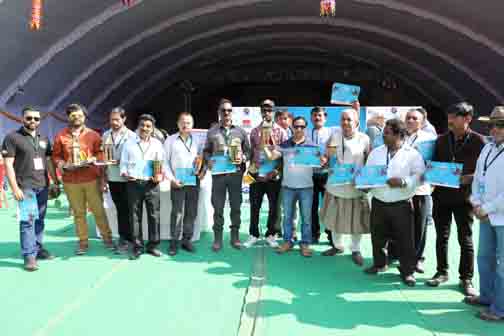 Dehradun, 20 Oct: A ‘Colonial and Afghan Links Heritage Walk’ was led by Ghanshyam Rai as a part of Virasat Festival, here, today. The walk started at 7 a.m. from Gandhi Park and ended at 8.30 a.m. at the Clock Tower. It took the participants to places like Astley Hall, Survey Chowk, Rangers’ College and the Clock Tower, while exploring the history of these places. More than 100 people joined the walk.
In the afternoon, there were surprise guests at the Virasat Stadium when Dhan Singh Rawat, Higher Education Minister of State, and Padma Shri awardee Dr Anil Prakash Joshi, environmentalist, visited the shops and interacted with the Virasat officials. They appreciated the efforts of REACH Virasat in organising such a wonderful event for the citizens of Dehradun
Later in the morning, a Classic Car and Bike Rally was flagged off from the Virasat village at the Ambedkar Stadium. More than 100 vehicles of various vintage participated. The enthusiasm of the owners, riders and drivers was equally matched by the energy by the Volunteers and spectators, who had come to the village in large numbers to look at the vintage cars, bikes, jeeps, etc.
Among the oldest cars and bikes were a 1930 Austin and 1938 Harley, owned by Dr S Farooq and Bhupender S Mahal, respectively.
Winners for maximum participation were Dr S Farooq for cars and Ravinder Singh for bikes.
The award winners were: Kunal Arora and Vijay Agarwal – Volunteers’ Choice; Saghir Ahmad and Noor Mohammad – Popular Choices; and Paras Verma – Sponsor’s Choice.
Also staged at the fair was the Goff Dance, also called the ”Ribbon Dance”, which is one of the popular folk dances of Goa. It is performed during the Shigmo festival in Phalgun month after Harvesting. Cancona was one of the last territories taken over by the Portuguese in Goa, hence the people there are much more rooted to their past tradition. Goff Dance is a group folk dance and can be performed by males or females attired in any type of traditional dress. Each dancer holds a colourful cord that hangs at the centre point of the ‘mand’, which is the site of the dance. The dancers start dancing intricately forming a beautiful, colourful intricate braid at the end of the movements. The music begins once again and the dancers reverse the pattern of dancing so that the braids gets unraveled and all the cords are loose and single once again. The songs that are sung during the dance performance are mostly devoted to Krishna. The musical instruments are Ghumat, Shamael and Surta Shansi that accompany the dance performance.
This was followed by a Carnatic vocal recital by Abhishek Raghuram. A name among the young vocalists in Carnatic music today is Abhishek Raghuram, a strong, assertive voice. Grandson of Palghat Raghu, Abhishek learnt the Mridanga from his grandfather before embarking on a singing career. Abhishek has been undergoing training in vocal music first from his mother and then his Guru PS Narayanaswamy since 1994. A popular up-and-coming vocalist, he is also a Khanjira artist who has accompanied numerous musicians. He is also a composer of tillanas. A performing vocalist since 1994, Abhishek made his debut at the age of nine under the auspices of the Percussive Arts Centre, Bangalore. He went on a concert tour of the US in 1999, along with his father. Abhishek has won several prizes in the competitions conducted by the various Music Academies and organizations.
There was also a performance of Sufi Singing by the Wadalis. Puranchand Wadali studied music from celebrated masters like Pandit Durga Das and Ustad Bade Ghulam Ali Khan of the Patiala Gharana. The Wadalis sing in the gurbani, kafi, ghazal and bhajan genres of music. They live in their ancestral house in Guru Ki Wadali, and teach music to those who promise to preserve it. They do not charge their disciples, and lead a very simple life devoted to the divine one.
Pooranchand was accompanied by his son, Lakhwinder. Lakhwinder has received extensive training and guidance in classical music from his father.

Garhwal Post has established itself as a credible, balanced and forward looking newspaper in India. Based in Uttarakhand, the daily is read by the aware, socially and culturally responsible, high-income elite of society.
Contact us: info@garhwalpost.in
fallout 4 date