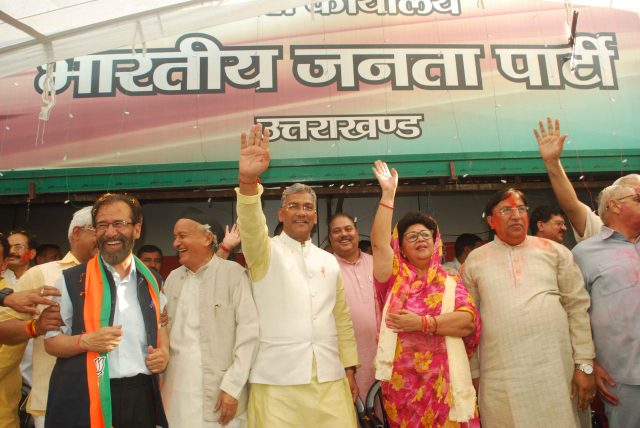 Dehradun, 23 May: It was a clean sweep for the ruling BJP in Uttarakhand as it won all the five Lok Sabha seats with impressive margins. Congress did not appear to be in fight on any of the five parliamentary constituencies. The most shocking loss for Congress was however on the Nainital-Udham Singh Nagar seat where its tallest leader in the state, Harish Rawat, was contesting. National General Secretary of the Congress and former Chief Minister, Rawat was handed a hugely embarrassing defeat by BJP State President Ajay Bhatt. Rawat lost by a margin of around 3.40 lakhs, which must be the most humiliating loss for him. Rawat trailed Bhatt from round one itself and sought to blame it on EVMs, something which he had done also after losing the assembly polls in 2017.
On the Tehri Parliamentary constituency, the outgoing MP, Maharani Mala RajyaLaxmi Shah of BJP, also put up a very impressive performance winning in the end against the Pradesh Congress Chief, Pritam Singh, by a margin of around 2.94 lakhs. Many political pundits had predicted a tough fight for her given the “anti-incumbency wave” against her.
In Pauri, the fight was between Manish Khanduri, son of senior BJP leader and outgoing MP BC Khanduri, but contesting on the Congress ticket, and his protégé, Tirath Singh Rawat of the BJP, both of whom were contesting the Parliamentary polls for the first time. Despite being BC Khanduri’s son, Manish Khanduri failed to impress the voters and lost to Tirath Singh Rawat of BJP by a margin of 2.85 lakhs.
In Haridwar, the outgoing MP, RP Nishank of the BJP, was up against Ambrish Kumar of Congress. Despite the fact that Ambrish Kumar had a strong hold over parts of Haridwar city, it was a walkover for Nishank who defeated Kumar by a margin of 2.59 lakhs.
In Almora, the fight was between the outgoing MP and Union Minister Ajay Tamta of BJP and Pradeep Tamta of Congress who is also a RajyaSabha MP from the state.
Many considered it a tough fight for Ajay Tamta but he too managed to score a huge win against Pradeep Tamta with a margin of 2.21 lakhs.
What is even more interesting is that it was a clean sweep for the BJP for the second straight time but with a bigger margin. While in the 2014 general polls, BJP had managed to secure around 55 percent vote share in Uttarakhand, the vote share has gone up to 62 percent this time. Congress has never crossed 43 percent of vote share in Uttarkhand.
Bharatiya Janata Party (BJP) workers celebrated as the saffron party scored a landslide victory in all the five Lok Sabha seats in the state.
In the state’s party headquarters here, a large number of workers gathered and distributed sweets. They also burst crackers at number of places.

Garhwal Post has established itself as a credible, balanced and forward looking newspaper in India. Based in Uttarakhand, the daily is read by the aware, socially and culturally responsible, high-income elite of society.
Contact us: info@garhwalpost.in
instant hookups buckinghamshire singles