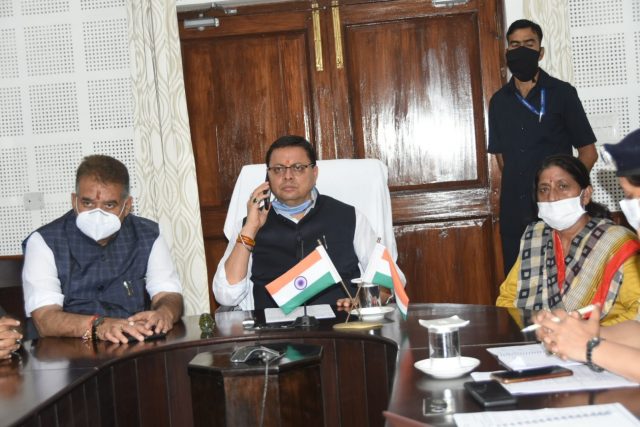 By Our Staff Reporter
Pithoragarh, 30 Aug: Jumma Village in Dharchula, here, faced the brunt of nature’s fury resulting in extensive destruction, last night. A number of houses collapsed and many persons went missing. Till last reports, five bodies had been recovered from the debris.
Five houses collapsed in the torrential rain in Jumma and two in Siraudyar Tok. Seven persons are reported missing. Five bodies have been recovered thus far, while the search continues for the remaining two.
According to DM Dr Ashish Chauhan there was a cloudburst last night in Jumma Village and seven persons were reported missing. Teams of the Revenue Department, SSB, Police and SDRF were sent for rescue and relief missions to the site. The NDRF has also been dispatched. The DM instructed officials to send relief materials to the site for the affected persons.
Chief Minister Pushkar Singh Dhami contacted the DM over the telephone and obtained information about the incident. He instructed the DM to waste neither time nor effort in providing relief and undertaking rescue operations. He asked that those injured be given the best medical treatment.
He also interacted with Kumaon Commissioner Sushil Kumar and ADM, Pithoragarh, Fincharam, virtually. He asked them to ensure that the survivors be shifted to safe areas. The required food and milk for children, as well as medicines, also be made available.
The Commissioner was asked to restore road connectivity, including the NH, at the earliest. He asked the PWD to clear the debris as quickly as possible.
The officials were asked to make an estimate of the loss incurred at the latest.
The CM is being updated on the situation and will visit the site once the weather clears.
Present during the interactions were Minister Ganesh Joshi, MLA Chandra Pant, MLA Khajan Das, Chief Disaster Management Officer Riddhim Aggarwal, Additional Secretary Dr Anand Srivastava and other officials.