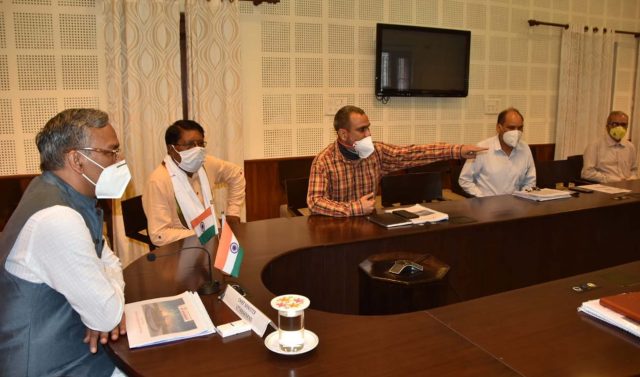 By OUR STAFF REPORTER
DEHRADUN, 21 Jul: Chief Minister Trivendra Singh Rawat obtained information about the progress of the Rishikesh-Karnprayag Railway Line Project from officials of the Rail Development Corporation, here, on Tuesday.
Chief Minister Rawat said that the railway line construction work should be accelerated. Full cooperation would be given by the state government to solve any kind of problems. He directed that special attention be paid to quality and transparency of work. He expressed confidence that, with the construction of this railway line, people of Uttarakhand along with devotees and tourists would be greatly convenienced. He also wanted a Rose Garden to be developed at the Rishikesh Railway Station.
As part of the 125.20-km Rishikesh-Karnprayag railway project, 12 stations and 17 tunnels are being constructed. Construction of a railway station at Rishikesh and a tunnel has been completed, while construction work on 5 tunnels is in progress. Work on three major railway bridges has started.
On this occasion, a presentation was also made on the Doiwala-Uttarkashi-Barkot railway line. It was stated at the meeting that a survey of this railway line has been done. The total cost of this project is estimated to Rs 24,000 crores. For this railway line, a survey has been done involving 10 stations, 24 tunnels and 19 bridges. This railway line will be about 122 kms long.
The Chief Minister said that this railway line would also help in promoting tourism, agriculture, horticulture, and local products.