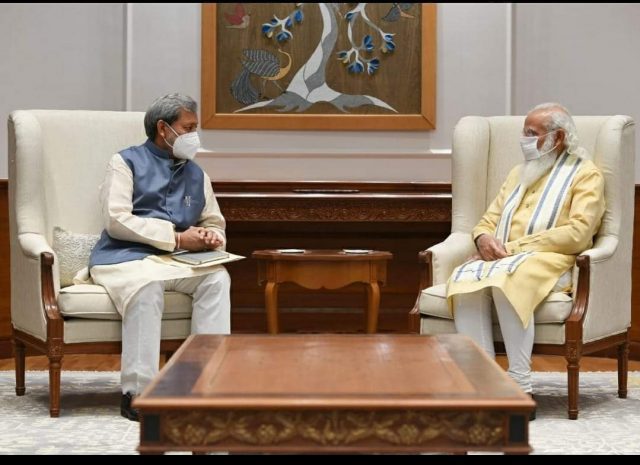 By Our Staff Reporter
Dehradun, 7 Jun: Chief Minister Tirath Singh Rawat today called on Prime Minister Narendra Modi at his official residence and discussed with him several issues related to Uttarakhand and also briefed him on the Corona situation, upgradation of the health infrastructure and some other issues pending with the Centre.
According to official sources, the meeting lasted about 40 minutes. The meeting began at around 5.30 p.m. Rawat expressed gratitude for the help received from the Centre in dealing with the Corona and other disasters. The CM claimed before the PM that the state is well prepared to deal with any possible third wave of Corona. He requested the PM for additional supplies of the vaccines so that they could be taken to the hills and administered at the earliest. He also asked the PM for additional supplies of foodgrains so that they could be sent to the hills for distribution there before the Monsoon.
PM Modi also inquired in detail about the state’s preparedness to deal with any possible third wave of Corona.
The CM also briefed the PM on the progress of the works in Kedarnath and Badrinath shrines and invited him to come to the state to inaugurate the works there. The Chief Minister also openly welcomed the Prime Minister’s announcement of giving free vaccine to every citizen of the country. He said that only Modi could have taken this decision to protect every citizen of the country.
CM Tirath Rawat later said that the Prime Minister had during the meeting assured Uttarakhand all possible help. He also thanked the PM for the announcement on providing free vaccine and food grains.