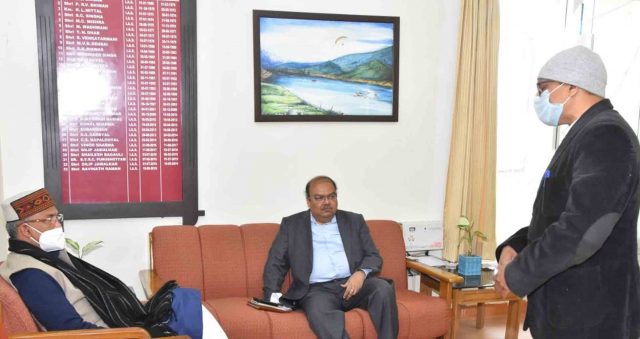 By Arun Pratap Singh
Dehradun, 19 Jan: It is a matter of common knowledge in the state as well as across the country how poorly the government offices are managed and how this often result in harassment and undue delays for the ordinary citizens. who have to often keep pursing their files in order to get things done. However, Chief Minister Trivendra Singh Rawat, in his fourth year of power suddenly conducted a surprise inspection, today, of the Garhwal Commissioner’s Camp Office located at EC Road near Survey Chowk, here.
He expressed displeasure at the poor attendance in the office at around 11 a.m. and the disorganised movement of files and registers in the office!
Though Chief Ministers in Uttarakhand have been known to conduct surprise raids of offices, particularly in the Secretariat and that, too, in the early part of their tenure, it is was perhaps for the first time that an office of such a senior level bureaucrat as the Garhwal Commissioner was raided by a chief minister.
The CM was accompanied by Chief Secretary Om Prakash and the duo suddenly made a surprise appearance at the Camp Office. Panic resulted in the office as the news of the CM and Chief Secretary visiting spread. The time was around 11 a.m. and only four personnel were present at that time though 11 are posted there. This displeased the Chief Minister and the Chief Secretary who then called for the attendance register and directed the Garhwal Commissioner, Ravinath Raman, to stop payment of salary to the officials who had not signed the register by that time, today.
Chief Minister Rawat visited the various rooms in the Commissioner’s Office and stayed there for about an hour. Rawat also demanded to see the inbound Dak register in which the post, receivable documents and applications are registered. However, he was told that the register had been sent to the Commissioner’s main office in Pauri for marking. Chief Minister Rawat and Chief Secretary Om Prakash expressed surprise at this arrangement and the CM asked on whose orders this arrangement of sending the register to Pauri was being done. He was told that the then PA of the Commissioner (Clerical Grade) had passed an oral order in this regard in the year 2019 and, since then, this was the protocol. The CM observed that this was indicative of negligence towards work and expressed dismay at this arrangement.
Expressing strong displeasure over this, Chief Minister Trivendra told Commissioner Ravinath Raman that it showed negligence towards work.
This surprise raid of the CM may lead to the officials in various government offices, particularly in the state capital, to pull up their socks for a while, but this hardly brings any change of permanent nature in the working of the offices and the officials in the offices or their attitudes. Certainly a better way to ensure better governance is the need of the hour and such symbolic exercises hardly bring any change for the better by themselves. A better system of monitoring the working of the various state and district level government offices is required to be put in place.
It is widely said in Uttarakhand that, here, the bureaucracy dominates governance and, often, the politicians prove to be quite ineffective in controlling it. A recent example of this was seen last week when senior cabinet minister Satpal Maharaj was touring certain districts of Kumaon region. Though his visit was official and a scheduled one, he was dismayed to find the DM and SP of Bageshwar missing on reaching the district. Though the Bageshwar district administration had been informed in advance about the schedule of Maharaj’s visit but both the top officers were simply missing from the scene. Naturally, this enraged the minister who called up Chief Secretary Om Prakash to express his displeasure. The Chief Secretary immediately wrote a letter to them seeking their explanation for remaining absent during the senior minister’s visit! Though, the SP has since been transferred as part of a routine transfer exercise by the DGP since several other officers were also transferred at the same time, the DM remains in his position. If such gross level of ignorance and lack of protocol goes unpunished, it is bound to encourage the bureaucrats to keep indulging in such irresponsible behaviour. In the past, too, some ministers and many MLAs have registered their complaints with the CM about the senior officers’ misbehaviour, or not even attending the meetings chaired by the ministers. The then DM, Udham Singh Nagar, had publicly argued with Kichha MLA Rajesh Shukla at a meeting which was chaired by Cabinet Minister Madan Kaushik. He had made a personal comment on Shukla. Kaushik was a mute witness and the MLA was forced to publicly make an issue of this and even register a breach of privilege complaint against the DM with the Speaker of the state assembly. The officer concerned was then quietly transferred to the CM’s Office instead of being reprimanded. Insider sources also claim that behind certain such incidencts is the political patronage at the highest level which encourages them to start ignoring protocol, too!