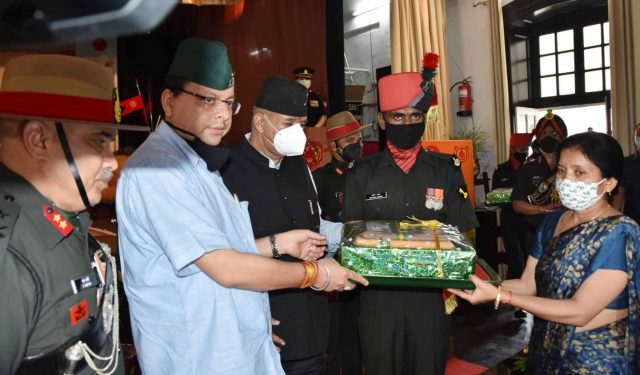 By Our Staff Reporter
Dehradun, 14 Aug: Chief Minister Pushkar Singh Dhami participated in the gallantry award ceremony of the Indian Army at RIMC Auditorium, here today under the aegis of Headquarters Uttarakhand Sub Area.
General Officer Commanding, Uttarakhand Sub Area, Major-General Sanjeev Khatri welcomed the Chief Guest and all the attendees.
On this occasion, the Chief Minister honoured soldiers, retired soldiers and veterans who received various medals. In all, 47 people were honoured today  including 21 serving soldiers, 20 retired soldiers and 6 veterans. 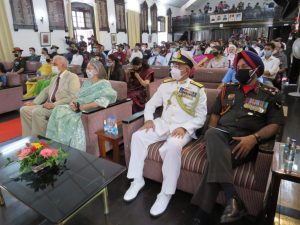 Speaking on the occasion, Dhami said that the state government was giving jobs to the dependents of the soldiers of the army and paramilitary forces who had attained martyrdom in war, in accordance with their educational qualifications, in the state services. So far, 17 soldiers’ dependents have been given jobs in the state services. He also reminded that Uttarakhand was the only state where a lump sum annual amount was paid for life to soldiers decorated with gallantry awards. Lump sum amount of soldiers decorated with Vishisht Seva Medal award has now been increased, he added. He further stated that the grant given per month to ex-servicemen and war widows of the Second World War has also been increased from Rs 8 thousand to 10 thousand.

Computer training for a period up to 6 months was also being given to make ex-servicemen, military widows and their dependents self-employed and self-reliant. This training is being given in all the districts.

The CM said that the government has also decided to grant Rs 50 thousand rupees to those who passed NDA and CDS preliminary exams for further preparation. Prime Minister Narendra Modi initiated the fifth Dham Sainyadham in Uttarakhand. A grand Military Dham would be built in Dehradun, he promised. The Chief Minister said that the soldiers residing in the cantonment area would be given exemption in house tax like those residing in other places of the state.
Chief Minister Pushkar Singh Dhami said that he was feeling proud to be honouring the brave soldiers and brave women of this nation. Saluting all the soldiers who sacrificed their lives for the unity and integrity of the country, he said that everyone in the country was safe because of the brave soldiers of India. The Chief Minister said that whenever he got an opportunity to participate in any of the programmes of the Army, he was reminded of his childhood and that it was always an emotional moment for him as he himself was a soldier’s son. Along with the valour of the soldiers, he had closely observed the daily struggle of his family members. Despite a lot of struggle in the life of a soldier, a soldier always does his work with perseverance, Dhami observed. He said that the Indian Army had always shown indomitable courage and valour. There is a long history of valour and courage of the army. He also noted that along with being  Devbhoomi, Uttarakhand was also a  Veerbhoomi, or land of the brave. Every family from Uttarakhand had a military connection and that it was difficult to describe in words the contribution made by the soldiers and military families of Uttarakhand.
The Chief Minister said that Prime Minister Narendra Modi had always worked to boost the morale of the Army.  On every festive occasion be it Holi or Deepawali , he liked to be amongst the armymen and celebrate the festival with them. Congratulating all the soldiers and brave hearts who were honoured, Cabinet Minister Ganesh Joshi said that it was because of the soldiers that the common man could sleep peacefully. He added that in  honour of soldiers, Sainik Samman Yatra would be taken out in the state in September. The soil of the courtyard of every martyr soldier of the state would be brought to Sainyadham. He added that many schemes were being run by the state government for the welfare of soldiers.
Commandant, Indian Military Academy, Lt-General Harinder Singh, senior army officers and serving and ex-servicemen and veterans were present on the occasion.
This event organised at Dehradun after a long time will ensure boosting the image of the Armed Forces personnel of Uttarakhand. The Ceremony gave a feeling to belongingness to the brave Veterans and the Veer Naris which is in line with the rich traditions of the Indian Army and Uttarakhand State to look after the welfare and well being of our Veterans.