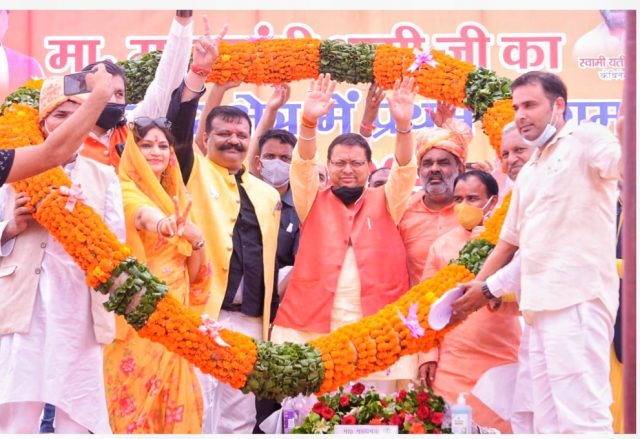 By Soniya Sharma
Roorkee, 12 Aug: Chief Minister Pushkar Singh Dhami on Thursday inaugurated and laid the foundation stones of schemes worth Rs 1469.25 lakh in Khanpur assembly constituency, here. These included the foundation stone of a building in Government Girls College, Dallawala, and various development schemes. Under the Central Road Fund Scheme, the strengthening and improvement work on Khanpur-Dallawala motor road will also be undertaken. A new tubewell has been funded for village Lalchandwala, as also in Village Balawali, Village Mohammadpur Khadar and Village Dumanpuri.
The Chief Minister inaugurated the programme by lighting the ceremonial lamp. He was welcomed by MLA Khanpur, Kunwar Pranav Singh ‘Champion’. Also present were Cabinet Minister, Higher Education, Dr Dhan Singh Rawat and MLA Swami Yatishwaranand. Chief Minister Dhami, after laying the foundation stones of the Government Girls’ College building and other schemes, announced that arrangements would be made for the education of, both, boys at the college. He also announced construction of bridges at Banganga Ghat in Giddhawali, Solani River Ghat at Hastamouli, at the Ganga Ghat in Sherpur Bela and installation of 60 hand pumps.
He also mentioned the work done by the government in the past four and a half years. He said the administration would respond promptly to the people’s demands. He declared that, in the next four months, all the people would be vaccinated.
Higher Education Minister Dr Dhan Singh Rawat said that, in a year, the degree college would be ready. Arrangements were being made for principals, teachers, buildings, etc., in every college, so that there is no hindrance in academic work. Free Wi-Fi is being arranged in all the colleges.
Sugarcane Development and Sugar Industry Minister Swami Yatheeswaranand said that the government is working for the welfare of all sections including farmers, the elderly and women.
MLA Champion informed the Chief Minister about the various problems in the area. MLA, Laksar, Sanjay Gupta sought opening of a sugarcane research center in the area. Senior District Panchayat member Rani Devyani drew attention of the dignitaries present to various problems of Khadar area.
Present on this occasion were BJP District President Jaipal Singh Chouhan, Roorkee Mayor Gaurav Goyal, Municipal President Ambriksh Garg, District Magistrate, Haridwar, Vinay Shankar Pandey, SSP, Haridwar, Senthil Abudai Krishnaraj S, Chief Development Officer Saurabh Gaharwar, Additional District Magistrate (Administration) BK Mishra, SDM, Laksar, Shailendra Singh Negi, SP, Dehat, Parmendra Doval, Chief Medical Officer SK Jha, Chief Education Officer Anand Bhardwaj, Kunwar Divya Prakash, Chaudhary Bhim Singh and officers of the departments concerned. 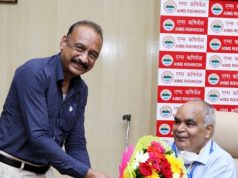 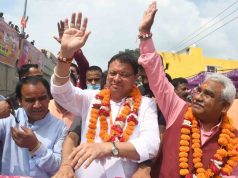 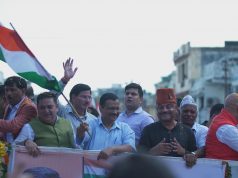 Kejriwal promises employment to youth if AAP elected to power