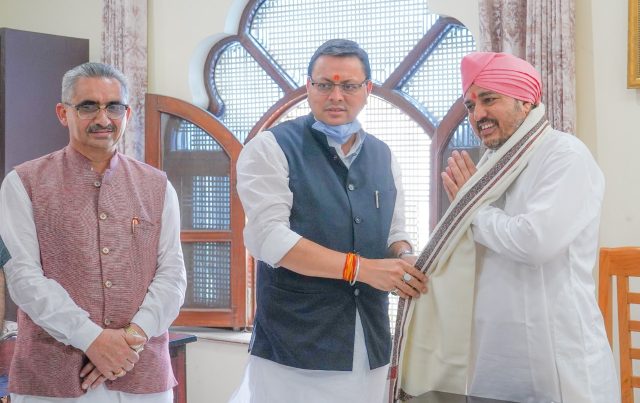 By Our Staff Reporter
Dehradun, 30 Aug: Chief Minister Pushkar Singh Dhami paid obeisance today at the Guru Ram Rai Darbar Sahib, here, and met Mahant Devendra Dass. They had a discussion on Uttarakhand’s development. Chief Minister Pushkar Singh Dhami had come to Shri Darbar Sahib for the first time after becoming Chief Minister.
As per the tradition of Shri Darbar Sahib, the Chief Minister was given a warm welcome. In the meeting with Mahant Devendra Dass, the Chief Minister praised the selfless service put in by the doctors and staff of Shri Mahant Indiresh Hospital during the Corona crisis. He also mentioned the hospital as a strong partner of the Uttarakhand Government.
The Mahant gifted a Rudraksh plant and a memento of the Shri Darbar Sahib to the Chief Minister. The Chief Minister also invited the Mahant to visit his residence.
The Mahant explained in detail about the contribution of SGRR Institutions in the field of imparting education. Shri Guru Ram Rai University and the public schools being run by the institution are performing praiseworthy duties in the field. The SGRR Education Mission has been providing quality education at affordable prices for decades. The Chief Minister said he was optimistic that, in the future also, the Mission would continue with this humanitarian task.
Also present were Mayor Sunil Uniyal ‘Gama’, Rajpur MLA Khajan Das, Raipur MLA Umesh Sharma ‘Kau’, and others.

Garhwal Post has established itself as a credible, balanced and forward looking newspaper in India. Based in Uttarakhand, the daily is read by the aware, socially and culturally responsible, high-income elite of society.
Contact us: info@garhwalpost.in
paid dating sites in south africa https://garhwalpost.in/salina-ks-dating/