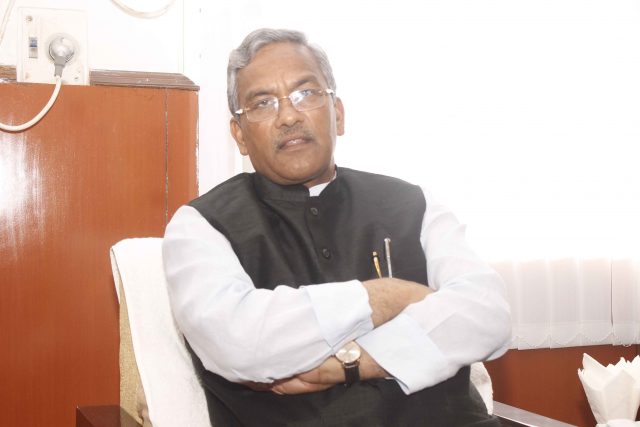 By Our Staff Reporter
Dehradun, 22 Aug: Chief Minister Trivendra Singh Rawat has directed that adequate measures should be taken towards effective control of Corona pandemic in the state. Chairing a review meeting in this respect at the Secretariat on Saturday, Rawat said that testing be increased further in the state and there ought to be no delay in sending test samples for testing even from remote areas. If required, even the helicopters be used to send samples for testing. He also directed that surveillance system also be strengthened. On this occasion the CM also launched the ‘Chikitsa Setu’ mobile app designed for Corona warriors. This mobile app is designed to protect doctors, paramedical staff, nurses, security personnel, police and officers and employees engaged in corona duty. On this occasion, a presentation was made about the app Arogya Rakshak focussed on home isolation.
The Chief Minister said that due to Covid, a large number of people had become unemployed. Several schemes have been launched for the unemployed in the state. People ought to have full awareness in respect of these schemes and therefore these schemes be widely publicised at district level. Chief Minister Rawat said that there was no definite time period for how long the effect of Covid would last. Most of those who had returned to state from other states during recent months would like to work in the state itself. The government would have to provide employment and self-employment opportunities for them. Funds have been arranged in the district plan and state sector to provide work to the people. He said that plans were being made to employ migrants through UPNL as well. The Chief Minister gave instructions to the District Magistrates and other officers that the phone calls of the people ought to be received essentially.
Chief Secretary Om Prakash said that it was necessary to stop community spread of Corona. Special vigilance was required in Dehradun, Haridwar, Udham Singh Nagar and Nainital districts. He said that the GIS mapping based software prepared by the District Collector Nainital was very useful. This software ought to be developed by NIC. This software ought to be used soon in all the four plains districts. He also said that there be no negligence or hesitation in creating a cantonment zones wherever required. He said that those coming to the state from other states ought to be scrutinised and monitored properly. Strict action be taken against those who hid facts and or were giving false information. The Chief Secretary said that Home Isolation be strictly followed. The guide of home isolation be widely disseminated through various means. Effective action be taken against those who violate the rules of Home Isolation.
Secretary Health Amit Negi said that 100 percent sampling of migrants, co-morbids, people coming from high risk area was required to be done. Adequate availability of ICU, Oxygen Support Beds and other necessary materials or equipment be maintained.