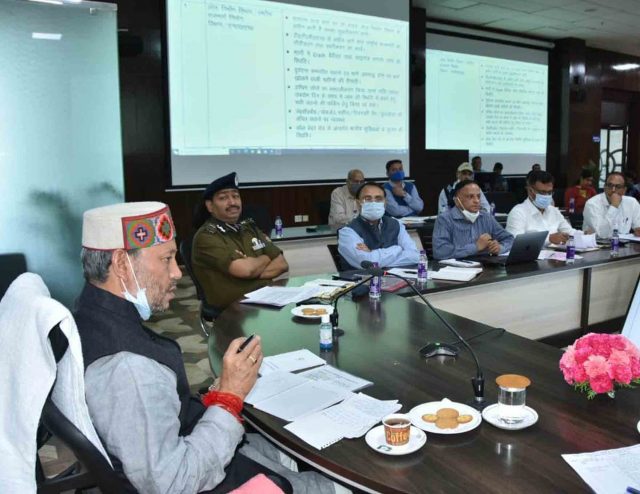 By Our Staff Reporter
Dehradun, 15 Mar: Chief Minister Tirath Singh Rawat reviewed preprations for the upcoming Char Dham Yatra season at a meeting held at the Secretariat, here, today. During the meeting, he instructed the officials to ensure that preparations and arrangements for the Yatra season are completed by 30 April. He stressed that no laxity would be tolerated in this regard. He added that special care should be taken regarding quality and speed of the work. The Chief Minister said that he himself would conduct physical inspection of the works. He instructed all secretaries to periodically monitor the progress of work related to their respective departments. He insisted that he be informed urgently in case any problem arises regarding the progress so that it could be resolved at the earliest.
Rawat reminded that the Char Dham shrines are a major centre of attraction for the devotees across the country and the world and noted that number of pilgrims to these shrines would rapidly rise in the coming season. He reminded that Uttarakhand is the main centre of faith in the country and the world.
He instructed that all the work related to improvement of roads on the Yatra routes be completed by 31 March. He added that in order to make the journey convenient for the pilgrims, adequate arrangements for drinking water, sanitation, signage and other basic facilities be made on the Yatra routes. An early action plan would be chalked out for arranging water ATMs along the Yatra routes. Water tankers would also be deployed along the Yatra routes in adequate number.
The Chief Minister directed the officers to expedite road related works from Joshimath, Gaurikund to Sonprayag and other affected places to ensure smooth journey. He instructed that during the Char Dham Yatra, adequate chopper services would be ensured for passengers and proper arrangements for online booking ensured. Complete transparency regarding the ticket booking system was to be maintained.
Tirath Singh Rawat said that in view of the travel season, all arrangements had to be completed in time regarding setting up of health and medical care along the Yatra routes and in the shrine areas. Adequate arrangements had to be made for air ambulances and 108 Ambulance service. Adequate number of cardiologists and ECG machines, oxygen cylinders would be deployed and ICUs and ventilators set up at Kedarnath and Yamunotri during the Yatra season. He also directed the officials to ensure proper lighting at Hemkund, also.
Directing the officials to ensure deployment of adequate number of vehicles for the Yatra, he added that special care should be taken to ensure fitness tests are properly done of all the vehicles being permitted to operate on Char Dham Yatra routes. He reminded that all the hotels along the Yatra routes would have to display their rate lists prominently and strict action taken against those found to be overcharging. He said he would periodically review the progress in this regard.
Chief Secretary Om Prakash, Additional Chief Secretary Radha Raturi, Principal Secretary RK Sudhanshu, DGP Ashok Kumar, Secretaries Amit Negi, Dilip Jawalkar, Nitesh Jha, Radhika Jha, Pankaj Pandey, Commissioner, Garhwal, Ravinath Raman, DIG, Garhwal, Neeru Garg, were present during the meeting while all the DMs and SPs of Garhwal Division and officers from related departments participated in the meeting through video conference.