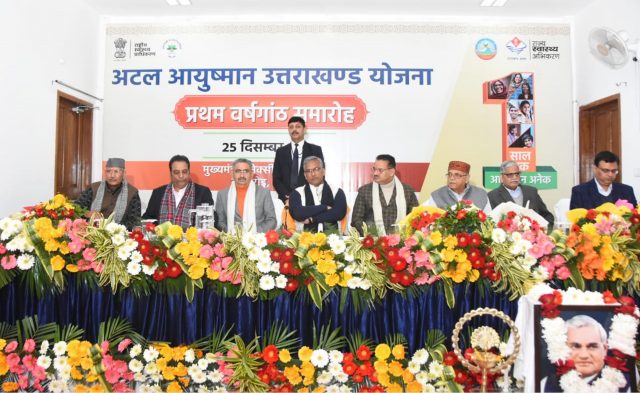 Dehradun, 25 Dec: Chief Minister TS Rawat attended the first anniversary of the Atal Ayushman Yojana at the Janata Darbar Hall in his official residence, here, today. On the occasion, he paid homage to the late former PM Atal Behari Vajpayee.
The CM also presented letters of appreciation to representatives of government and private hospitals that had performed well under the health insurance scheme. These included AIIMS Rishikesh, Doon Medical College, Sushila Tiwari Government Medical College, Swami Ram Himalayan Hospital, Mahant Indiresh Hospital, Metro Hospital and Heart Institute, Haridwar, and Ujala Health Centre, Udham Singh Nagar. ‘Arogya Mitras’ and ASHA Coordinators who had performed well were also felicitated. The CM also interacted with those who had benefited from the Atal Ayushman Scheme.
The CM recalled that, on 23 September, 2018, PM Modi had provided to the nation the world’s largest Health Scheme – the Ayushman Bharat Yojana. This had benefited 10 crore BPL families. Inspired by this, on 25 December, 2018, Uttarakhand had launched its own ‘Atal Ayushman Yojana’, for which every family living in the state was eligible. The target was to provide ‘golden cards’ to 1.1 crore families.
He added that ICUs were being established in every district. While eight had been set up, the remaining would be functional within a year. It was also planned to take health services to the state’s remotest villages. Nobody would be deprived of medical support because of financial constraints.
Mussoorie MLA Ganesh Joshi described the scheme as a boon for the people of the state. The government was focusing on health and sanitation in a big way.
Chairman of the Yojana, DK Kotia pointed out that Uttarakhand was the country’s first state to provide universal health coverage up to Rs 5 lakhs per year. It would serve as a blessing, particularly for the hill areas. As many as 34.70 lakh golden cards had been issued, thus far. It was second only to Kerala in this regard. As many as 175 hospitals had been empanelled under the scheme. Payments were being made within a week. All golden cards would be issued in the next six months. Till now, more than 1.1 lakh persons had received treatment under the scheme, for which payment of Rs 105 crore had been made.
Health Secretary Nitesh Jha claimed that efforts were on to improve medical services in the state. Permission had been received to establish a hundred bed hospital in Haridwar.
Among those present on the occasion were MLAs Harbans Kapoor, Vinod Chamoli, Mayor Sunil Uniyal ‘Gama’, Gyan Singh Negi, DG, Health, Dr Amita Upreti, etc.