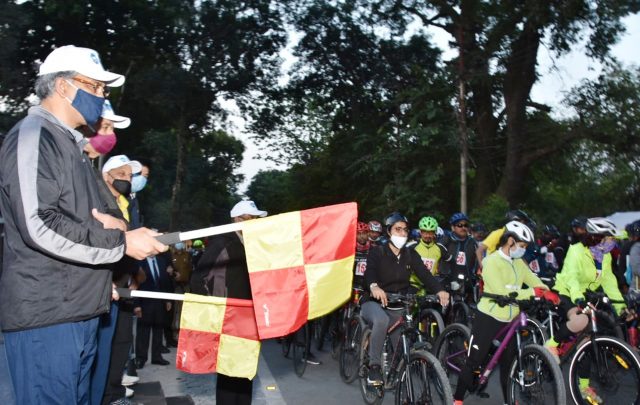 By Our Staff Reporter
Dehradun, 8 Nov: Chief Minister Trivendra Singh Rawat today flagged off at mountain terrain biking rally organised by Uttarakhand Tourism Development Board on the eve of State Formation Day.
Congratulating everyone on the state entering its 21st year, Chief Minister Rawat said that Uttarakhand is full of geographic diversity, which provides a lot of potential for adventure sports. He reminded that the state government had decided to create a separate department to promote adventure sports. He pointed out the cycle rally from the CM’s Residence to George Everest Estate would be an adventure filled activity. Expressing happiness over the participation of 13 women in the mountain biking rally, the Chief Minister hoped it would also attract other women to adventure sports.
MLA Ganesh Joshi congratulated all the participants on Uttarakhand entering the 21st year of its existence.
Secretary, Tourism, Dilip Javalkar added that, on the occasion of Uttarakhand State Formation Day, the Uttarakhand Tourism Development Board has organised various programmes. Due to Covid-19, precautions and guidelines were being followed. Tourists had been invited to these programmes, which had started with the mountain terrain biking rally. The rally would conclude at the George Everest in Mussoorie, where the Balloon Festival is also slated to be held.