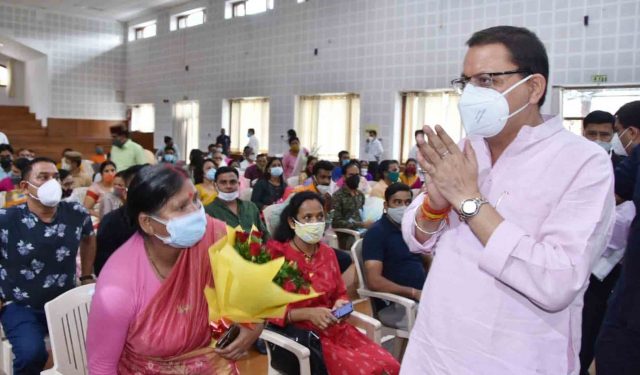 By Our Staff Reporter
Dehradun, 9 Jul: Chief Minister Pushkar Singh Dhami today held his first Janata Darshan. The Janata Darshan was held in the Janata Darshan Hall at the Chief Minister’s official residence. Dhami gave a patient hearing to the problems of the people on the occasion. Most of the problems that were brought up today before the CM were related to roads, drinking water, health and seeking of financial assistance.
Chief Minister Pushkar Singh Dhami said that instructions had been given to the officers for speedy redressal of public problems. He appealed to the people to take maximum benefit of the public welfare schemes of the government. He directed the officers to resolve the problems on the spot as far as possible. He also directed them to expedite the long-term pending works.
Dhami stated that the government was specially focussed on increasing employment opportunities, women empowerment and rural development.
Later, the CM was also scheduled to leave for Delhi this evening. This will be his first tour to Delhi after taking over as CM. Dhami is expected to meet several senior ministers and seek their help for Uttarakhand. He is also expected to meet Maharashtra Governor Bhagat Singh Koshiyari at Maharashtra Sadan in New Delhi as Koshiyari is currently stated to be in New Delhi.