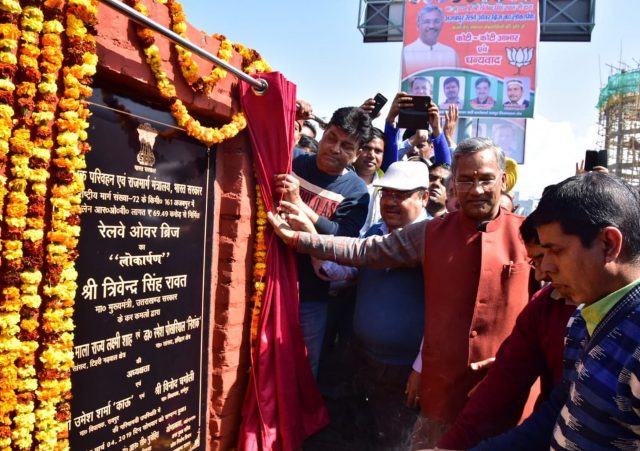 DEHRADUN, 4 Mar: Chief Minister TS Rawat inaugurated the four-lane Ajabpur Railway Overbridge on NH 72, here, today. It is 815 metres long and 19 metres wide. He congratulated the engineers and executing agency for completing the project on time.
He disclosed that the Race Course-Bhandari Bagh Flyover had also been sanctioned. Several projects had been completed in the past two years. Over fifteen thousand government orders had been issued regarding construction of roads, which would be completed by next year. There was also good progress on constructing rural roads. An award had been received from the Union Government in this regard.
He claimed that it was the government’s intent to take development to the most remote areas, with special attention paid to health and education. The NCERT syllabus had been implemented in schools. Assistant professors had been appointed in medical colleges. Lecturers, too, were being recruited in the higher education sector. A national law university would be established in Doiwala. In Tourism, the focus was on high-end tourists. There had been an increase of six lakh tourists in the past year. People from 24 countries had come for the Tehri Lake Festival. The state was also becoming a film shooting destination.
Present on the occasion were Tehri MP Mala Rajya Laxmi Shah, MLAs Umesh Sharma ‘Kau’, Harbans Kapoor, Mayor Sunil Uniyal ‘Gama’, Additional Chief Secretary Om Prakash, public representatives, officials and local people.

Garhwal Post has established itself as a credible, balanced and forward looking newspaper in India. Based in Uttarakhand, the daily is read by the aware, socially and culturally responsible, high-income elite of society.
Contact us: info@garhwalpost.in
dating in pinehurst nc absolutely free hookup sites dating profile for guys